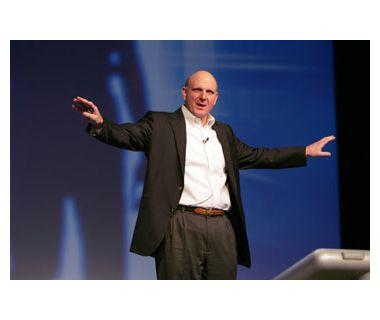 Given the massive investment that corporate, what are the key factors you believe are now going to drive us into Cloud Computing? Why would we entrust Microsoft with its cloud provision, over other competitors such as Google?

Well, let me take it in a variety of ways. First of all, anytime there is a major disruption you want to make sure you take advantage of it. The book 'The Innovator's Dilemma' says "You can't as a company that's established miss the next major revolution".

So we are embracing Software + Services, Cloud Computing as hard as anybody. By the time we finish our Professional Developers Conference this month, I think you'll have to say that there is nobody out there with as wide a range of Cloud Computing services as Microsoft, including, dare I say it, Google - which has a great search product but, at the end of the day, doesn't really have much for Enterprise email, productivity, collaboration. They are trying. They are coming to the game. But they are not really there yet.

I think we have, and our prices reflect an ability to let you get to the disruptive point easily, from the place you are now financially.

Steve, I guess the $64,000 question from a lot of people's point of view is, is there going to be an Office for the Web, something that really competes head on with Google Docs, Google Apps?

Well, those are not very popular products! I hope that we are not competing head on with those! I hope we actually compete head on with Microsoft Office. If you take a look at it, Google Docs and Spreadsheets have relatively low usage and have not grown over the last six months or so.

So, in the backend of Microsoft R&D, are there people beavering away at versions of Word, PowerPoint, Excel, etc, that are purely web based? Or, is it always going to be this hybrid?

What does it mean to be purely Web based? Do we want them to be as only as powerful as 'runs in a browser'? No. We want software that is more powerful than runs in a browser. Does that mean we will not have some neat stuff that does run in the browser? No.

We think you'll actually want the full power of Word, Excel and PowerPoint - and you'll want to be able to get that simply. But, if you just happen to be in an Internet cafe kiosk and you want to do some light editing, perhaps we need to have a way to support you in that as well, inside the browser. And for today, that's going to have to be all the detail I share. Otherwise, we have no drum roll announcement coming up here in a month!

There's a lot of different views on what the 'cloud' is going to look like? Will it be a data center that you have and you own it yourself? Will it belong to Amazon or some other organization? Maybe you could even franchise it and work with rivals or peers and operate a data center in that way. What do you think it will look like? Which slice of the pie will be the biggest?

I think before we are done, the answer is 'Yes'. No, all of those models will need to flourish. I think it would be nuts for me to say that we are going to run all of the world's data centers. I don't think that's practical.

But what we need to do is a build a service that we start running and we have a model for how it can also be implemented and hosted by corporations for themselves, or by other partners.

The service must be a service. If it's not in our data center, if it's in somebody's else's, you'll still want it updated in real time, dynamically. You don't want it to be like today's outsourced model - where the outsourcer winds up locked in, and has to embrace the past more than the future.

So, we need to design 'a service for services', if you will. That's kind of the way we are attacking the challenge.

Now, Version 1 that we will announce this month, you'll think about it as running a Microsoft data center, sort of like the Amazon model. And yet we know and we've talked already with corporations and partners about going beyond it.

That's why the symmetry between the server and the cloud is important. Because if we bring back the cloud features into the server platform, it's also possible for any corporation then to go into instance of its own similar services.

Now, is this going to be the Microsoft data center that we'll be talking to?

On V1 that will be the only alternative, that's right

Are you going to build here [UK] as well?

Why has Microsoft developed Zune?

At the end of the day, one of the big trends is that all content is going digital. And if we don't have the software and services that are useful, helpful and valuable for the consumption of music and video, we are sort of not really a player.

It seems to me to be a tricky one because Apple is out there, and they have a pretty good product - but also they have this kind of cult following of people who are just going to buy, because it's Apple. That must be a frustrating thing to compete against.

They may have a cult following in the music business, and we got about 97 percent of PC users using our stuff. 97 percent may not constitute a cult! But I wouldn't trade that for a cult!