After the Open, Tennis Australia CIO shoots for winning IT 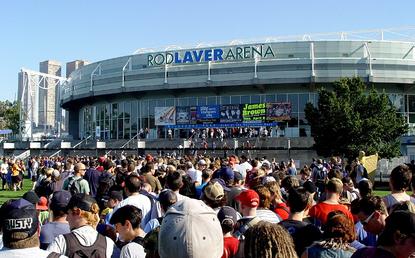 Being appointed an organisation's first CIO is a challenge at the best of times, but when you have an international Grand Slam tennis tournament to prepare for in two months things are just that much more hectic.

That's what it was like for Tennis Australia's first CIO, Chris Yates, who began the job in a baptism of fire by managing IT during the Australian Open.

Helpdesk calls average 120 to 150 per month at Tennis Australia, but for January it did 1200 help desk calls. All these things run on technology.

But as Yates puts it, “after the party there is a lot of mess to clean up” and Tennis Australia wants its information systems to offer more just coping with a huge rush for four weeks of every year.

“My predecessors did a great job, but my role is a new position and is on the senior management team,” Yates said, adding his appointment is part of Tennis Australia's strategy to promote the sport of tennis by leveraging IT.

Tennis Australia's basic charter is to “make Australia the greatest tennis playing nation on the planet” and it has approached this objective at a number of levels — from player development at the grass-roots tennis club level to making the game enjoyable to watch, and planning how to put money back to improve it.

When former Nortel Networks executive Steve Wood took over Tennis Australia in 2005 his focus was a restructure with people with business skills and revived a focus on IT which was “lacking”.

Before Tennis Australia could attempt its software ambitions, significant reform was required in the data centre.

During the first year of Yates' tenure his strategy was based around infrastructure as “everything had to be rebuilt from scratch”.

The new data centre and server infrastructure cost about $1 million, and a fleet of new desktops with a SOE was an additional $250,000.

“On the server side we are moving to Windows Server 2008 on IBM blade servers,” Yates said.

Tennis Australia is also using VMware to virtualise servers deemed to have a low usage requirement or for testing new software.

Software strategy to expand IT's reach

With the infrastructure now in place, Yates can focus on developing a wide information management strategy at Tennis Australia, which will involve a mixture of in-house an outsourced applications.

“We are putting an advanced coach management system to track athletes and also making more software available to the tennis community which I see as an important direction,” Yates said.

Yates is looking closely at what Tennis Australia can do to help people communicate and “do things more easily”.

“I want to deliver more software to the community, including tournament software for all tournaments affiliated with Tennis Australia and that's going quite well. We used it for two tournaments prior to the Australian Open and it's much easer than using Excel or paper. We're now looking at some competition software.”

Another way to create a “supporting environment” for tennis people is with social networking, which Yates sees as a “big thing”.

“We're having discussions with them so we'll see how that pans out [and] we may set up strategic partnerships with social networking providers,” he said.

Yates, who has held IT director and consulting roles before Tennis Australia, is cautiously optimistic about SaaS and is looking at how it can be best leveraged.

“There are various things you can't buy software for,” he said. “We have internal software developers and we are looking at what we can use SaaS for, but I have also asked developers to look at Web services which has been good.”

Yates, who reports directly to the CEO, wants to be in control of core systems, but use third-party software where it makes sense.

“This year we outsourced HR and time management to BigRedSky and are using iFocus for online e-learning,” Yates said.

Tennis Australia's long-time partnership with IBM for IT services during the Australian Open is an example of this selective procurement philosophy.

“For the Open I don't need that infrastructure all year [so] it's software as a service,” Yates said, adding the whole system has become more portable with the advent of blade servers.

“We are not permanently set up here [Melbourne Park] so we have to take everything out as we are in temporary accommodation.”

Another big project will be the relaunch of Tennis Australia's membership system, which is still under an NDA with negotiating vendors.

“That will be the membership system for tennis players Australia-wide and will go down to the individual at a social level.”

A membership system like this also affords the option of a self-service portal and other services.

Another key technology directive for Tennis Australia is wireless networking, which has to be deployed selectively due to the nature of its flagship site at Melbourne Park.

“Grand Slams show off technology, but there still has to be a business case for it all,” Yates said.

As reported in Computerworld, Tennis Australia considered blanketing the Melbourne Park site with Wi-Fi as far back as 2005, but natural reflectors of radio waves made it impractical.

“Wi-Fi is a popular one,” Yates said. “But with heat resistance, solar radiation, and TV broadcasters there is interference.”

Journalists and photographers get Wi-Fi access, and so does the players lounge, so wireless remains in “strategically picked” areas.

“For Internet access across the site we prefer to go with cable,” Yates said. “3G is also good, but no matter what you are on you will get interference.”

The same goes for RFID, which could possibly be used to streamline visitor access and ticket scanning.

“We'd love to roll it out but it's not our number one priory,” Yates said. “For RFID to be financially viable it needs to be run year-round. So it's still wish-list sort of stuff.”

“We need to have a good business case for it and I have to show a cost justification.”

A new generation of IT skills

To ensure Tennis Australia has access to the skills it will need to keep IT at the forefront of its business, it runs a student intern program, which Yates believes should be done by more IT departments.

“People in IT should be doing more to groom people for IT roles,” he said. “We take first- and second-year university students for at least two weeks in the year. When they discover they have learned more in two months than four years of uni they are even more enthused about IT.

Yates believes this generation of IT leaders are not mentoring young people enough.

“It is an impetus that has to grow within the older IT community,” he said.