Vivek Ranadivé of Tibco: 'We are entering the third era of IT' 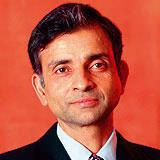 With the word ‘recession' on every-body's lips, an unprecedented collapse in the finance sector still echoing, and a year of flat IT budgets being widely predicted, you could forgive the CEO of Tibco for being a little downbeat. But Vivek Ranadivé, the boss of arguably the world's largest integration software specialist, is coming out fighting and he has some solid financial numbers with which to back himself.

Ranadivé founded what became Tibco back in 1985 and quickly made the company into an icon of middleware, as the company that sold the code that glued together the applications and business processes of the world's largest companies, helping them to gain a real-time view of operations and markets. His thesis was to create the software equivalent of a computer bus where cards can be plugged in and out to add functions - in fact, Tibco stands for The Information Bus Company.

Success was rapid, although Ranadivé's back story was somewhat different to the silver spoon background of many of Silicon Valley's masters of the universe. He was born in Mumbai and as a boy came across a TV documentary that started him dreaming of becoming a student of the Massachusetts Institute of Technology.

He eventually achieved his aim, arriving in the Boston area with little in the way of cash but a world of drive, and by the time he graduated he was running his own technology consulting firm.

Today, Tibco is a widely recognised monument in the enterprise software landscape but everybody knows that 2009 will be a challenging year for most businesses, including business technology, as Goldman Sachs forecast an eight per cent slump in technology spending in developed markets and Gartner recently slashed forecasts for sales of enterprise software to 6.6 per cent growth globally.

But as a proud technologist and frequent iconoclast, Ranadivé casts a brighter light on things.

"What we see, in spite of the economic turmoil, is actually very exciting," he insists, speaking by phone from Tibco's Palo Alto headquarters in California.

"I see IT entering the third era. In the early 1960s, the enabling technology was the mainframe and it was a two-tier architecture. With Enterprise 1.0 you had a bank with 10 million customers and a few thousand branches to support them; you'd deposit your cheque and overnight your account was updated. Software was tied to the hardware.

"In the 1980s you had client/server, which I call Enterprise 2.0. Software was no longer tied to hardware but to the database, and you had a ramp up in velocity.

"Today we're in the early stages of Enterprise 3.0, where companies have hundreds of millions of discrete events every month and maybe a petabyte of storage. We've gone from static to dynamic, from database to a dynamic enterprise service bus, ERP to end-to-end business processes, and from business intelligence to proactive systems. Most businesses do their business in memory and memory price has fallen faster than disk storage. The velocity of life has become event-driven - it happens on the fly."

Of course, at the time of the first dotcom wave in the late 1990s, Ranadivé was among the first to proclaim the importance of having all things becoming "event--driven" and happening "on the fly". Bill Gates wrote Business At The Speed Of Thought, Ranadivé wrote The Power of Now and everybody hymned the importance of real-time systems that would recognise changes and automate reactions based on business rules. A stock price trigger could create a buy in milliseconds with no manual intervention. Smart companies with very low latency would prosper while laggards would be left behind - electrons would -replace brain cells because the human brain could not process quickly enough.

Today, however, there would appear to be some reaction against some of these principles in favour of human experience, thinking things over and aversion to risk. That reaction has only been exacerbated by the shocking events of last year when, despite massive investments in business intelligence and risk management software, firms still failed to see the warning signs of impending disaster.

"They had antiquated systems," he says of companies caught up in the turmoil. "[They should have been] increasing the velocity not just at the trading desk but at the middle and the back office too. GRC [governance risk and compliance] was still operating in batch while something else was operating at the speed of light."

As a firm with deep links to financial services, you might expect Tibco to have been rocked by the crisis, but its fourth quarter was a record, with US$185.5m in revenues and a highest ever US$32.3m in profit, and Ranadivé also sees upside in the growth in popularity of service-oriented architecture, or SOA, as providing a boost to business.

"SOA is the best thing that happened to our industry," he says. "It's providing the on-ramps onto the highway for us to create business processes and apply rules-based systems. It's like when became defined and the database business took off."

Indeed, Ranadivé believes that SOA will in some ways become the new database, just more sophisticated and automated. "The database is a like a phone that doesn't ring and nobody knows what's happened. You have to query it to know," he says.

Ranadivé is less confident about getting a boost from another burgeoning sector, software as a service, suggesting that its effect might be limited to applications such as sales force automation and customer -relationship management.

"With SaaS, one size doesn't fit all," he says. "For core infrastructure, most companies would be unwilling to have that run outside their own boundaries."

Despite the solid financials, speculation on Tibco's future has popped up frequently in the last few years as middleware specialists like BEA, WebMethods and SeeBeyond Technology have been snapped up by enterprise giants.

Perhaps predictably, Ranadivé fends off criticism that the software giants now provide a one-stop-shop by defending the importance of best-of-breed players and the narrow focus of Tibco's research and development budget.

"In terms of our space, we're bigger than everyone else and we outspend them all on R&D," says Ranadivé. "We're the last neutral party."

For many organisations, that message will resonate. "I chose to work with Tibco because they had a great understanding of what we were doing," says Tim Mann, CIO of financial savings firm Skandia. "You get quick access to high-level people who are very familiar with your environment."

Mann adds that the joint setting up of a ‘Tibco Competence Centre' at Skandia was also one of the reasons for picking the company.

Ranadivé can also count on some support from an influential member of the analyst community.

"Vivek is just one of those dynamic people you meet and say ‘that was a great discussion'," says Ray Wang, vice president of Forrester Research and an expert on the enterprise software industry.

"From my friends at Tibco, he's seen as very passionate, he's learned to be more patient with age, and is seen as very smart and visionary. He does a good job hiring -really smart people, both street smarts and, of course, book smarts."

Also, Ranadivé has some ideas as to how Tibco can survive and even prosper through 2009, including adding focus to getting quicker wins and upping the proportion of services in the revenue mix.

As befits a self-made man, he has a bulldog reluctance to let go of his company's position, and as befits one of the most important information technology visionaries of recent times he has an optimistic sense of what can be achieved.

Far from being at the close of the integration era, he believes, "we're only just at the beginning of what we can do".

In the mid-1970s, Vivek Ranadivé left his native Mumbai, India at the tender age of 17 with two months' worth of funds and a place at the famous Massachusetts Institute of Technology (MIT) in Cambridge, near Boston.

He joined Ford then went on to Fortune Systems and M/A-COM Linkabit before setting out on the road that led to Tibco. In 1985, after turning down a job at Goldman Sachs he started his own company, Teknekron Software Systems, the outfit that later became Tibco. Teknekron was a success, delivering real-time market data to financial institutions.

In the early 1990s, Teknekron broadened out to develop software for companies outside the financial ambit then sold out to Reuters, and in 1996, the company changed its name to Tibco, reflecting the firm's core technology - the name is short for The Information Bus Company. Later, Tibco Software became a separate entity.

Since then, Tibco has become one of the best known names in middleware, helping to tie together the systems, platforms, applications and business processes of the world's largest companies. In 2004, it made a move into business process management software with the acquisition of Staffware and entered the business intelligence sector with a deal to buy Spotfire in 2007.

Today, the company turns over more than US$644m annually and delivered record profits for its most recent financial quarter.

The Power of Now

Extracted from The Power of Nowby Vivek Ranadivé

How will your company compete and prosper in the new millennium? How can you raise your company above the ravages of creeping commercialisation and gain that critical, elusive competitive advantage?

The answer lies in becoming event-driven. Event-driven companies are the most successful at sensing and responding to the events that drive their businesses.

They use the power of real-time information to drive the development and delivery of new products and services.

The event-driven state of mind is by no means an invention of the digital age; its existence long preceded the wheel. In commerce, the event-driven state of mind has been in evidence for thousands of years wherever traders competed in the marketplace and practised the fine art of custom-tailored, knowledge-based personal service to a clientele small enough to be managed by one brain.

Information systems are not an overlay to what your company is doing. They should be integral to your strategy. In fact, it may be very hard to implement any change in strategy without leading that change from the IT side. Though we seem to be drowning in information today, there will be orders of magnitude more information in play in the network, increasing the business necessity of systems that automate as many processes as possible and filter what is worth our attention from what is routine. These systems will require human intervention only in the most exceptional situations, and they will deliver crucial, value-added information about the entire commercial environment where and when it is needed. That, in a nutshell, is the mission of business integration technology and the value of being event-driven can offer any company seeking a competitive advantage.

The event-driven company does not form alliances. It eschews the cosy comforts of the keiretsu, with its interlocking relationships, because a keiretsu is a closed environment. Value thrives best in open systems.

The event-driven company is part of an information-intensive cellular structure, the virtual, integrated, real-time supply web. Its relationships with suppliers and partners/allies change quickly, and , when convenient. (And the company is prepared for the same treatment in return; in fact, it welcomes the same treatment as a way to prove its continuing value.)

Team players are OK. But the event-driven company prefers to hire - and tolerate the quirks of - ‘star' employees, who are often prima donnas. Star employees are quick to pursue emerging trends and take the risks that bring the highest rewards.

There's no need to watch the competition if you're spending enough time watching and learning from your customers. The competition can be a fatal distraction. Perfectly profitable companies went down the tubes trying to best competitors that didn't have to be defeated.