Boeing CIO John M Hinshaw talks about rationalising IT, surviving the financial crisis and the challenges of migrating 200,000 desktops to Windows 7. 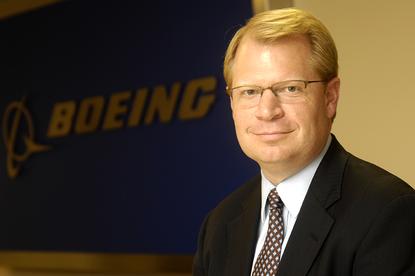 Boeing CIO John M Hinshaw knows a thing or two about how to run an IT department.

Hinshaw joined the aviation giant Boeing two and a half years ago as its global CIO, where he oversees all IT, including infrastructure, security, and IT revenue generating opportunities for Boeing's airline and government customers.

Prior to joining Boeing, Hinshaw spent 14 years in a range of different key IT positions at US mobile carrier Verizon Wireless, eventually working his way up to CIO and earning Verizon's IT organisation a top 15 ranking in Computerworld's 2006 Best Places to Work in IT awards along the way.

In 2009, Hinshaw was named CIO of the year by the Executives' Club of Chicago and the Association of Information Technology Professionals, and he was also recently honoured with the Top Ten Leaders and Change Agents Award at the Global CIO Summit. This year, Boeing's IT organisation was honoured by Baseline magazine as one of five leaders in business-technology convergence. Additionally, for the second straight year the Uptime Institute presented Boeing IT with an award for world-class data centre operations.

According to Hinshaw, the scale and scope of the products and services Boeing offers is unrivalled by any other company in the world. The scale and complexity of IT at Boeing is also much larger and more complex than anything he experienced at his previous roles.

With 3500 employees in Australia, including several hundred in IT, Australia is Boeing's largest base outside the US and a large market for the company. Hinshaw describes Boeing’s IT souring model as "balanced", but says services are predominantly delivered in-house because of the nature of the work involved. Boeing’s sourcing ratio stands at about 25 per cent sourced labour and 75 per cent in-house. Hinshaw says others have done more, but it is less so in the defence and aerospace industries.

Recently in Australia to meet with the staff and customers, including the Department of Defence in Canberra and Australian government CIO Ann Steward, Hinshaw spoke with CIO about rationalising IT, surviving the financial crisis, SaaS and cloud computing, migrating 200,000 desktops to Windows 7 and what it takes to be a good IT leader.

What are some of you cost reduction strategies?

No CIO is ever happy with costs. It's a constant mission to get costs lower. Every dollar spent at Boeing on IT could be spent on product development. We spend less on IT every year and get more value out of it.

Boeing has renegotiated better terms with key suppliers and prioritised its IT work. We have tried to balance where the work is done and we are now more certain outsourced work gives good value for the dollar.

With about 160,000 employees in 90 countries Boeing has a lot of suppliers and needs to better leverage 'the one Boeing' across the company. I can buy IT products globally as opposed to in any one country, which saves money.

What are the most pressing issues for Boeing a year after the GFC?

The good thing about our business is there is a $US320 billion backlog of defence and airline orders. The number of orders for new planes has gone down, but we will deliver more planes in 2009 than in 2008. There is still demand in emerging markets and new planes are 20 to 30 per cent more efficient that older aircraft.

We have weathered the GFC well. We are more judicious where we spend IT capital. The Dreamliner had some delays, which put pressure on it, but we hope to fly it this month.

How is Boeing’s housekeeping going? Are you rationalising the number of systems, staff, etc?

When I came on board the number one priority was to simplify IT operations. In 2007 we had 10,000 corporate applications company-wide.

Each business had their own IT shops. We brought them all together and have been rationalising applications at a rate of around 1000 a year, so this year it will be 8000.

We also had about 60 data centres and are down to six today. Our roadmap is to have three, which will save significant cost reduction in the power drain.

Do you find it ironic that increasing use of technology (for example, telepresence) may be reducing the need for flights, thus impacting Boeing’s business?

We want people to travel so there is a little bit of dichotomy, but at the end of the day what is the business need?

How are you adopting advanced technologies like digital prototyping and collaboration?

The Dreamliner was digitally prototyped. Taking computer aided diagrams to the supply chain has allowed us to get the Dreamliner to market faster. That is the present and the future -- not just the design, but the maintenance of the plane. Using software to facilitate the collaboration of engineering projects is also a big part of Boeing IT.

We use engineering manufacturing products, and the defence operations uses Siemens Unigraphic. These are global systems that engineers use for collaboration. For example, the Melbourne team designs wings for assembly in Seattle.

Do you encourage the use of social networking applications among staff?

Boeing also has an internal tool called Insight which is similar to Facebook and MySpace where employees enter a profile and join groups within the company. For example, there is a composite structural engineers group.

In just one year of use the number of subscribers has risen to around 30,000 so it has been successful.

We do allow employees to go to public social networking sites, but we have a warning screen to tell people not to disclose private information. We also have frequent e-mails sent to employees on what to remember when they are outside the firewall.

What about virtualisation and cloud computing? Is it suitable for a large engineering organisation with a lot of internal IT?

There are a lot of areas where could computing doesn’t make sense, particularly with proprietary systems, but we are talking to cloud providers like Microsoft and Amazon about where we can leverage cloud computing. For example, the Boeing online store was developed in-house, but is now hosted by Amazon.

We have virtualised all of our servers and employees in different programs can tap into the private cloud for server and storage space. We took our existing environment and put it together in a much more cost effective way.

Most of Boeing’s large servers are virtualised and about 50 per cent of the total number are virtual. That will continue to be greater trend as the collaboration between suppliers is getting better. In the future everything will be virtualised.

Also, is SaaS a viable software sourcing model for you?

I’m a strong fan of Salesforce.com and we are using it today and working on some CRM apps for commercial airplanes. For business service applications it has real promise. It really comes down to speed to market and the time it would take to develop internally.

A lot of our work is very proprietary in nature, and there is government work that needs to remain secure. Those are IT positions that can't be outsourced.

Boeing has a long history of using Linux and open source. What’s your strategy here and what do you think of open source on the desktop?

Boeing has always been on the cutting edge of technology. We have a policy for open source and work with Red Hat and other companies. We are also careful to understand the code that comes in. So much code is open source in the world we live in today, so we need to take advantage of it.

Some internal systems in R&D are open source, which makes a lot of sense. These are areas where you can take a little more risk.

We've looked at open source on the desktop, but it's not ready for prime time. At this point we haven't been successful.

Another big industry development this year was the release of Windows 7. Will it be adopted at Boeing?

Boeing has been testing Windows 7 for a year and will deploy it over the next 12 months. It is expected to be running on some 200,000 desktops throughout the company. A dedicated director is now accountable for Boeing's Windows 7 deployment.

Windows 7 is stable and the application support seems to work well. About half of the migration program will be in desktop refreshes.

We are also working with Dell on a "desktop as a service" package. A good monthly price will allow me to refresh the desktops more frequently.

What about aircraft IT systems, are they part of your domain?

Telemetry is in the engineering area. We assist there with testing and the security aspects of these systems. The Dreamliner has 300 computer systems and 19 million lines of code. And the pilots have full control to override these systems.

We do build unmanned planes for government. Airline systems are sourced from key suppliers like Honeywell and they are very tightly controlled. They are not commodity systems.

Of the 9000 IT employees, about 10 per cent are working on IT programs with customers. For example, an airport might need new IT systems and we can help.

We are also working with governments for IT services, including the Australian government. Boeing staff are frequently employed to work within government departments and our IT services offerings come with products and services as a bundle.

What do you think are some of the most challenging aspects of IT today?

Security causes the most challenges. Much of my time is spent ensuring we have a secure IT to work with. The threats are increasing, and so is the amount of attention we need to pay to them.

Every day about 300,000 people are logging into Boeing systems -- from employees to partners and suppliers -- so we are always improving remote access to be more secure.

What are some of the things you've learned as a CIO?

A lot of CIOs like to talk about technology, but the leadership and the leaders that you pick, that is important. It comes down to people in the end.

I've spent a lot of time building leaders from the inside and out. For example, the CIO of Boeing Australia (John Williamson) is one of my direct reports.

We have leadership attributes all leaders are measured by -- like how they inspire others, find a way through road blocks, live the core values of the company and deliver results.

It’s extremely important to communicate to your team as much as possible. I speak with employees regularly and have a monthly newsletter to all IT staff worldwide. I have a blog as well, and get a lot of great input to the IT team. That type of communication is important. A good CIO has good communications ability.

What do you think the CIO position look like in ten years?

The CIO role is one of the few roles where you get to see every part of the company -- every product and service. You have to understand the entire company and the people.

That positions the CIO very well to be a good counsellor to the other executives, and so it will become a more trusted executive role.

As more companies run their businesses on IT they will be enabled by technology, so if the roadmap is there the CIO will be more strategic. If IT is just seen as a cost centre then the CIO "career is over" moniker will be apparent. The CIO has to manage growth and productivity, and the CIO of the future will have both in their sight.