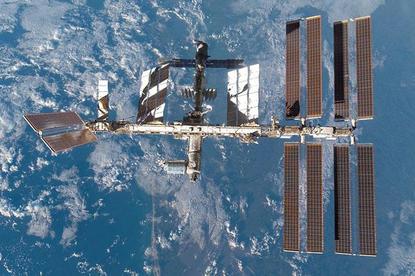 While NASA budget-keepers focus on setting future priorities for the space agency, many in the world space community is trying to turn attention to the benefits a mostly complete International Space Station will provide global science.

While detractors say the ISS is a costly lab that may never see a great return on investment, building the ISS has cost NASA $48.5 billion, the leaders of the ISS agencies from Canada, Europe, Japan, Russia, and the United States met in Tokyo, Japan recently to reaffirm the importance of full exploitation of the station's scientific, engineering, utilization, and education potential.

The group says now that the ISS is mostly complete, the station’s crew and its US, European, Japanese and Russian labs will expand the pace of space-based research to unprecedented levels. Nearly 150 experiments are currently under way on the station, and more than 400 experiments have been conducted since research began nine years ago. These experiments already are leading to advances in the fight against food poisoning, new methods for delivering medicine to cancer cells and the development of more capable engines and materials for use on Earth and in space.

NASA has identified 197 US-integrated investigations that have been conducted on orbit as of April 2009, though 55 of these investigations were conducted on the Space Shuttle missions to the ISS instead of on the ISS itself. According to NASA, as of February 2009, US ISS and research have resulted in over 160 publications, including articles on topics such as protein crystallization, plant growth, and human research. According to NASA, there have also been approximately 25 technology demonstration experiments flown on the ISS.

The ISS now houses a multicultural crew of six and has a mass of almost 800,000 pounds and a habitable volume of more than 12,000 cubic feet – approximately the size of a five-bedroom home, and uses state-of-the-art systems to generate solar electricity, recycle nearly 85% of its water and generate much of own oxygen supply. Nearly 190 astronauts have visited the space station, which is currently supporting its 22nd resident crew.

The group noted “there are no identified technical constraints to continuing ISS operations beyond the current planning horizon of 2015 to at least 2020, and that the partnership is currently working to certify on-orbit elements through 2028.”

The heads of ISS agency expressed their interest in continuing ISS operations and utilization. They acknowledged that a US fiscal year 2011 budget consistent with the US administration's budget request would let the United States support the continuation of ISS operations and utilization activities to at least 2020. They emphasized their intent to reach consensus later this year on the continuation of the ISS to the next decade.

The groups’ plan faces a number of challenges however. According to a recent report by the US Government Accountability Office, the ISS needs to deal with a number of issues to remain viable: The retirement of the Space Shuttle and the loss of its unmatched capacity to move cargo and astronauts to and from the station; the uncertain future for the station beyond 2015; and the limited time available for research due to competing demands for the crew’s time. Unless the decision is made to extend station operations, NASA has only 5 years to execute a robust research program before the International Space Station is deorbited. The leaves little time to establish a strong utilization program, the GAO stated.

NASA this week said it could ramp the space shuttle program back up if it were instructed to do so. NASA program manager John Shannon said it costs $200 million a month to keep the shuttle fleet flying. Shannon noted to that NASA has the external fuel tank and twin solid rocket boosters for at least one more shuttle mission beyond the four remaining flights, should it be needed in case of emergency.

Even if such a program were developed, NASA faces a significant constraint because of limited crew time. “There can only be six crew members aboard the station at one time due to the number of spaces available in the “lifeboats,” or docked spacecraft that can transport the crew in case of an emergency. As such, crew time cannot presently be increased to meet increased demand. Though available crew time may increase as the six-person crew becomes more experienced with operating the space station efficiently or if the crew volunteers its free time for research, crew time for US research remains a limiting factor,” the GAO stated.

NASA also ranks limited crew time as a significant constraint for science on board the ISS. The size of the crew on board the station is constrained at six by the number of spaces available in the “lifeboats,” or docked spacecraft that can transport the crew in case of an emergency. As such, at present crew time cannot be increased to meet increased demand. Further, crew time is shared between NASA and its international partners (JAXA, ESA, CSA, and Russia). According to NASA, the ISS crew members work 8.5 hours a day, and during this time they conduct maintenance, vehicle traffic operations, training, medical operations, human research experiments, and the experiments of NASA and the international partners. NASA documentation shows that the remaining crew time will be spent eating, sleeping, and exercising, the GAO reported.

For now though, the current Expedition 22 is adjusting the Japanese Kibo laboratory’s robotic arm, transferring cargo to the docked Soyuz TMA-16 spacecraft that will leave the ISS on March 18 an d prepping for the space shuttle Discovery‘s arrival next month.

Discovery, currently is sitting on Launch Pad 39A at NASA's Kennedy Space Center. After Discovery’s launch, slated for April 5, there are only three shuttle launched remaining.