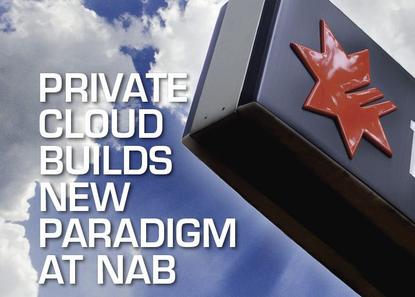 With the arrival of UBank just after the global financial crisis, NAB took an opportunity to break free from its legacy infrastructure and test a new technology stack — built almost completely with Oracle software.

[ Read Part I of NAB's private Cloud journey at CIO ]

From the hardware up, NAB engineered a private Cloud based on Oracle Enterprise Linux and Oracle’s (Xen-based) virtualisation platform for infrastructure-as-a-service.

Above that, there are the Oracle clustered databases (11g RAC) and Oracle business intelligence which provides ‘database-as-a-service’. And, at a higher level, shared WebLogic installations provide application PaaS.

The higher-level software is a mixture of software Oracle now owns following its acquisition of BEA and Sun, including Tuxedo and JRockit.

NAB is also deploying a number of Oracle banking applications in the Flexcube suite and several other finance and risk applications. A Web front-end portal sits along side the Oracle identity and risk management solutions.

“So in our environment we’re basically building up what we refer to as an infrastructure-as-a-service internal private Cloud, based on Oracle virtual grid technology and blade servers underneath that as well,” Beer said. “It’s a combination of both VMs and physical server deployments [and] operating systems in that environment.

“Using those technologies, we create a database-as-aservice platform that we’ll offer out to, or are offering out to, a large number of our other applications that we need to deploy [including] business services beyond just the UBank platform.”

With a large number of different business units, adopting a private Cloud should go a long way to standardising the way application servers are used at the bank.

On top of the all the software infrastructure is what the bank calls ‘Web portal-as-service’, which is another example of a PaaS, but Web portal-focused.

As NAB moves forward with PaaS and the software matures, it will look to integrate identity management services and adopt better Cloud management capabilities.

“UBank as a business, or as a brand, for us started with a zero customer base,” Beer said. “It’s a complete end-to-end banking solution that we’re building up both from an application level and from an underlying service level.”

NAB’s journey towards PaaS has given it the confidence to expand the infrastructure beyond new ventures like Ubank.

The bank plans to transform and renew its core platforms to enable future business models. “As we continue on the path of our business transformation we will be moving all of the existing customer base from our National Bank brand,” Beer said. “We have something like 6 million customers under the National Australia Bank brand in Australia [to move] onto this platform”.

“So it’s quite important to us to build a service-focused, service-orientated infrastructure and platform as a service provisioning capability. Obviously there’s a maturity path as we go forward and we’re looking at some of the Cloud management tools but [if] it can be done for an organisation the size of the National [then] it can be done probably in your organisation as well.”

NAB IT strategists view PaaS as “significantly less complex” and easier to integrate. The architecture also poses less of an IT focus and is less costly to support and adapt as its business evolves.

An early adopter of open systems

NAB’s private Cloud is certainly a radical development for an organisation of its size and influence, but the bank has a history of challenging incumbent processes and methodologies.

In 2004 the NAB developed SOA-based applications for financial planning and in 2006 went public with details of its Linux-based grid computing infrastructure which used Oracle’s 10g database on Red Hat Linux.

At the time it was one of the largest data warehouses (about 11TB) in the sector with some 30GB of transactions processed every day on Linux-based infrastructure. The data warehouse is used for every major part of the bank, but critically for financial reporting, global risk management, and regulatory reporting, including Basel II compliance.

Moving from large-scale systems to low-cost hardware was a big change for the bank, but it did result in faster transaction processing and more flexible procurement options.

The first move to Linux on Intel may have paved the way for broader adoption of open systems for NAB’s private Cloud, but it still needed to adopt yet another platform in Oracle Enterprise Linux and its associated virtualisation tools.

While Red Hat maintains it still has a good relationship with the bank and “hundreds of servers” in production, time will tell if it can compete against the Oracle juggernaut, particularly with NAB standardising on Oracle at the application level.