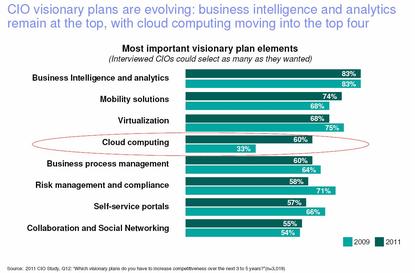 We have been talking about it for years but it looks as if it’s finally happening - CEOs and CIOs are aligned in their thinking around the future challenges and complexity and IT plays a critical role.

That is one of the findings from a global study of more than 3000 chief information officers, including more than 100 from Australia and New Zealand, released by IBM.

“Right up front we found there was a very strong alignment between the views of CEOs and the views of the CIOs in this particular study,” IBM Global Business Services partner, Matt English, said.

Last year, IBM conducted a global study into CEO priorities and one of the themes to come out of the research was the extent of change and complexity that CEOs were seeing in future challenges.

“There is almost an identical alignment in terms of the sentiments,” English said. “It’s important for many reasons but two in particular... it’s important from alignment in investment decisions. The second, and just as important issue, is around resourcing for those initiatives”

The study, which involved intensive one-on-one interviews with CIOs, found that of the 181 respondents in Australia and New Zealand, 92 per cent cited business intelligence (BI) and analytics as the key tool to enhance their organisation’s competitiveness. Globally, the figure was 83 per cent.

Mobility solutions also ranked highly; some 84 per cent of A/NZ CIOs identified mobility as the next best way to boost competitiveness, compared with 74 per cent globally.

For the CIOs of companies such as Boral, Leighton Contractors and Veda Advantage, the findings highlight the evolution of the CIO roles over the last four to five years.

“For many years, IT was seen as the guys at the back who turned the handle and did the general ledger,” Leighton Contractors CIO, Diane Fernley-Jones, said. “We were not really seen as integral to the business.

“I think what has forced the change is that increase in the complexity of IT in supporting the business. Certainly I have seen that growth from the back room to where we are today.”

Read more about IT leaders in CIO Australia’s Management category.

Whereas even five years ago, CIOs were looking at underpinning legacy systems to support business growth, today business leaders recognise the need to make significant IT investments as part of the business strategy.

“CIOs these days wear as much a business hat as a technology hat,” Veda Advantage CIO, Tony Kesby, said. “It been a long time coming but I think it’s here now. The CIO sits at the table as a business executive without a slant on technology other than how to use it to get close to our customer.”

The study outlines four CIO groups, which the IBM has termed ‘CIO mandates’. The categories include:

Boral Group IT manager, Greg Palmer, puts himself fairly and squarely in the leverage group.

“That’s where the business wants us to be at the moment at this point in the change cycle,” he said.

Historically, Boral’s business units have operated as silos, but the organisation is changing that. Under its ‘One Boral’ strategy, the enterprise is looking to standardise systems and employ common, simplified processes.

“In line with that, in the IT space we have a two prong strategy: Front line effectiveness and transactional efficiency.”

The front line is all about making it easier for people within Boral to serve their customers. Transactional efficiency focuses on doing thing more cheaply and efficiently.