Livescribe already had a great product with its original digital pen, which recorded audio and synced it to notes taken in a real (paper!) notebook. The Livescribe Sky smartpen adds Wi-Fi and Evernote integration. 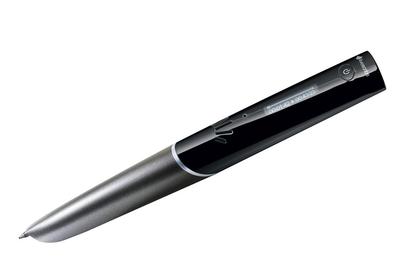 Using a microphone and camera built into the pen, the original Livescribe Pulse smartpen digitised handwritten notes and automatically matched each pen stroke to the precise moment in the audio that the note was taken. The combined text and audio could be accessed through the pen or transferred to a Mac or PC for storage by USB.

An updated model, the Livescribe Echo, streamlined and enhanced the design of the pen, making it slightly slimmer and adding a grip and universal headphone jack.

The latest model in the range, Sky, delivers more dramatic changes: the addition of Wi-Fi wireless transfers, direct integration with Evernote and device pairing capability for Android and Apple smartphones and tablets.

The additions have potential to be quite exciting. Notes and recordings taken during a business meeting, for example, can be automatically sent to the Cloud and accessible immediately on any device that runs an Evernote app. Notes can also be directly shared from the pen through email or to Dropbox, Google Drive or Facebook.

I spent a couple of weeks testing the new model Livescribe pen. The core functionality of the pen continues to work as advertised: click record in the notepad, take notes and the pen seamlessly syncs your scrawls with the audio. When you’re finished, it all goes straight to the cloud.

However, I did encounter some integration issues with Evernote in the pre-release version of the Sky.

The new pen looks nearly identical to the Livescribe Echo, with the exception of the Sky's dark silver grip. It’s still about the size of a cigar, but it’s hard to blame Livescribe given what’s inside.

The pen is comfortable to hold and won’t roll when you place it down on a desk. A small but bright and easy to read OLED screen is built into the pen and displays important information like audio time and a menu. On the end of the pen are a mini-USB port and a microphone jack.

The Sky is available in three models with different amounts of storage: 2GB, 4GB and 8GB, priced at $229, $275 and $345, respectively. The 8GB version includes a folio cover with room to stick an iPad and a one-year subscription to Evernote Premium.

Considering some tablets and smartphones can be had for the same price, the cost of the Sky could be prohibitive for some. However, if you find yourself more comfortable taking notes with a pen in lectures or business meetings, it may be enticing despite the price tag.

The pen continues to rely on special microdot notepads made and sold by Livescribe. The pages have a series of pictograms that you can use to control various functions, and the new versions now include access to wireless-specific functions. The device still supports older editions. As before, the notepads are sold at prices comparable to their more mundane counterparts.

Be warned that Evernote limits the amount of data that can be transferred in a given month. Free accounts normally provide 60MB per month, but through an agreement between the two companies, Livescribe users get an extra 500MB. Users who purchase the 8GB version of the Sky get a free year of Evernote Premium (normally $5 per month), which ups that to 1GB per month.

Setting up Wi-Fi is easier than it sounds, thanks to designated buttons and a full keyboard located on the inside cover of each notepad. Connecting is a matter of using the pen to press “Scan for Networks,” scrolling through a list on the pen’s on-board OLED screen and then hitting a button to confirm. If the network is closed, a password can be quickly entered by tapping the on a printed keyboard in the notepad.

The downside here is that the pen won’t connect to any public Wi-Fi network that requires the user to open a browser to enter a password. Livescribe says it will release an app that will let users tether the pen to a computer in order to connect, but I was unable to test this capability.

Making matters worse, Wi-Fi is now the only way to transfer notes to a computer; the USB cord is now used only for charging the pen and the abovementioned tethering feature.

If you can wait to transfer files until you get home or back to the office, this may not be a serious problem. The pen still has on-board storage (the pen comes in 2GB, 4GB and 8GB versions), and the device will automatically sync to the cloud as soon as it finds a usable network.

With Sky, Livescribe has completely replaced its old application for Mac OS and Windows with Evernote. The obvious benefit of this is it means access to notes on any device that runs the Evernote app, including smartphones and tablets.

Unfortunately, the move does mean several old functions have been lost.

Evernote lacks the playback software found in the original Livescribe app. Livescribe has addressed this by building a new HTML5 player. Simply click the note in Evernote and the player opens in any HTML5-capable browser.

However, the Web player at times felt sluggish and I experienced occasional bugs starting playback of my notes.

It’s also majorly stripped down compared to the original Livescribe app. There is no way to zoom in or out of notes, something that makes notes difficult to read on smaller screens. In addition, the HTML5 player does not include a slider to control playback speed, which is quite useful for transcription.

A Livescribe spokesperson said that the company will address the performance issues and may make other enhancements to the HTML5 player in the future. All of these problems can be avoided by playing back audio directly from the pen using the handy buttons printed on every page of the notepads.

Evernote also lacks a way to delete old notes and audio from the pen’s internal storage. Livescribe said that archiving content won’t be available at launch but is on the roadmap for early 2013. Until then, users can free up space directly through the pen’s OLED menu interface.

I also experienced a problem with Evernote not listing my note pages in the correct order after syncing. However, this too is expected to be fixed shortly.

As discussed in my initial hands-on, device pairing has some cool applications, like syncing notes to pages of a PDF and signing digital documents. Livescribe hopes to encourage Android and iOS developers to design other apps that use the Sky as an input device.

Livescribe said it also plans to release a tool to print out any photo or document on its microdot paper, allowing users to take notes directly on the printout.

The device pairing capability will be available for Apple devices in Q4 and Android in Q1 2013, so I was unable to test it out for myself.

I’ve been using Livescribe products since the original Pulse smartpen. It’s revolutionised the way I do journalism, letting me quickly get to the essentials of long-winded speeches that I’ve recorded.

The new features of Sky have the potential to make my job even easier. However, Livescribe still needs to smooth Evernote integration before this device can soar.