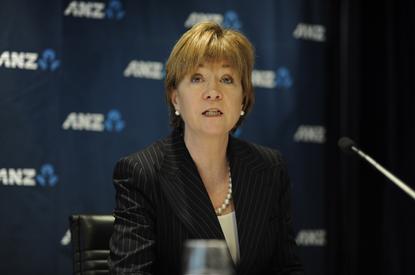 While CBA CIO Michael Harte has dismissed data sovereignty and security excuses used by businesses not to move to the cloud as “absolute garbage”, over at ANZ, CIO Anne Weatherston has taken a different approach.

Speaking to CIO Australia during Gartner’s annual Symposium/ITxpo, Weatherston said the bank implemented private cloud during 2012 for all of its EIX Solaris services and over the next two years it will introduce private cloud for its mainframe, Windows and Teradata environments.

“Private cloud is very important to us and we believe that we can provision services much more quickly to the business but we’ll also be able to reduce the cost of services by 70 per cent,” she said.

“That said, because of the regulatory environment ANZ is in, we don’t see it going any further than private cloud. The Australian Prudential Regulation Authority [APRA] is still very much against public cloud and hybrid cloud use.”

However, as she has to answer to 32 different banking regulators in the 32 countries within the Asia Pacific that ANZ Bank operates in, security is still paramount.

Weatherston said these regulators have concerns about public cloud and the security of information held within public clouds.

“If you look at most of the big cyber crime hacks they’ve come through cloud,” she said. “For example, the Sony [Playstation Network] attack [in 2011] came through an Amazon server.”

“When it comes to customers, security is the number one priority for customers of banks. With financial transactions, a lot of customers aren’t comfortable with any kind of cloud interaction,” Weatherston said.

“We have to assume that customer data is precious and we are guardians of that data.”

Turning to mobile banking, Weatherston said that ANZ was actively working on re-configuring its GoMoney Internet and mobile application.

“The strategy there is we’ve selected Sybase 365 and this will replace our existing online and mobile services.”

According to Weatherston, the look and feel of the Sybase powered mobile banking platform will be as close to GoMoney as possible but with 'cross-channel' functionality.

“A lot of the frustration our customer have with things like GoMoney is specific to how it operates on iPhone or Android phones. This service can be used from any device and it will be a consistent experience.”

For example, if an ANZ Bank customer uses Internet or mobile banking on their iPad tablet or Android phone they will see exactly the same functions and be able to transact, view payments and account details.

She added that the bank anticipates releasing the reconfigured GoMoney service in Australia during the first half of 2013.

“The GoMoney brand will still exist and everything you can do in GoMoney you will be able to do in Sybase.”

In addition to reworking GoMoney, ANZ Bank is undertaking a pilot of Near Field Communications (NFC) payments with 30 ANZ staff in Australia, with the staff having a virtual ANZ Visa or MasterCard credit card on their smartphone.

The bank plans to release the NFC payment option commercially sometime during 2013.

“NFC is in pilot at the moment because we’re trying to work out what the take up rate will be amongst our merchants,” Weatherston said. “Innovations such as NFC are just a matter of time and Australia is further ahead than any other country in the world looking at this technology.”

“The beauty of Sybase GoMoney is that we can integrate all of the NFC traffic into that platform. Customers will be able to have a holistic view of banking transactions.”

While Weatherson has no plans to follow Westpac CIO Clive Whincup’s strategy of offshoring more IT jobs, she did say that regional IT centres were important for the bank.

“When I joined the bank in 2010, there were 1500 IT employees working for ANZ in Bangalore, India. This is entirely consistent with the fact that we’re going to be a super-regional bank,” she said.

“We believe all of our services will be provided from a number of delivery centres. For example, the way we view IT, we will put the IT development where we believe we can get the best skills. In New Zealand we plan to build centres of excellence in our core domains such as payments and data,” she said.

According to Weatherston, New Zealand may become the bank’s centre for payments development because of the skill sets in the country.

She currently heads up an IT department in Australia of 4000 staff with no plans to outsource major IT functions.

“I still don’t believe in outsourcing because I think many outsourcing deals become a case of `it’s too difficult, let’s give it to a vendor’,” she said. “If you’ve got the right leadership and people you can be efficient as any outsourcing arrangement. “

However, Weatherson does believe in managed service agreements for IT functions that she has deemed “non-core” to the bank.

“Take the Capgemini deal that we did earlier in the year for all of our testing. We took the deal because of our 700 testers, 60 per cent of them were contractors.”

“What we wanted to do [with the Capgemini contract] was drive up the consistency and quality of the service. By taking our testers, they can train and develop them.”