Rural and regional Aussies to get better broadband from space 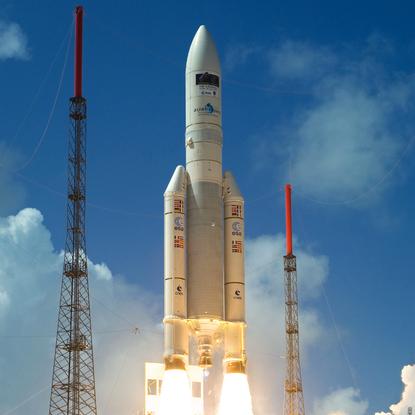 Federal communications minister Senator Stephen Conroy claims two satellites, to launch in 2015, will offer broadband services to the bush that will be faster than most people receive in Brisbane, Melbourne and Sydney on the current copper network today.

Californian company Space Systems/Loral is currently building the satellites, which will be hurled into space in 2015 during two launches from Europe’s spaceport in French Guiana, situated on the Equator on the North Atlantic Coast of South America. The satellites weigh 6.25 tonnes each.

“The contract is the final key procurement in NBN Co’s preparation to implement a long-term satellite service,” Conroy said on Monday morning.

Conroy claimed that the speeds offered by the new satellite service will be “better than what most people can get on the old copper network today,” in Sydney, Melbourne and Brisbane.

NBN Co said the satellites will provide fast internet to up to 200,000 homes, farms and businesses in some of the most remote areas of the country.

NBN Co boss Mike Quigley said existing satellites in space that provide internet services “have a mere fraction of the capacity of these satellites.”

The Federal government seems to have its work cut out convincing small businesses – many in regional and rural areas – that the NBN will benefit their businesses.

Conroy told Computerworld the government has programs in place to encourage small business uptake but “no question, we have still go a lot to do.” He said the government’s $10 million Digital Enterprise Program has so far been rolled out to about 30 communities across the country.

These programs provide training for not-for-profit organisations and help local councils use the NBN.

“If you go to Armidale [NSW] where it has been going the longest, you will find small businesses that have been through the program will tell you that they are benefiting," Conroy said.

“[But] it’s hard to get people who aren’t in the [NBN] footprint to make decisions about what to do with the NBN when they don’t quite know when they are connecting yet.

“Most of our focus is in the areas where we are actually rolling it [the NBN] out. Local councils are running programs, the Chamber of Commerce in Armidale is running the enterprise program and we also have individual training courses for people who have never touched a computer before,” Conroy said.

When asked how a change of government might affect the deployment of these new satellite services, NBN Co's Quigley said the company "is proceeding on the job that it has been given by the government, which is to get everything in place to make sure that we can provide the people in the bush with a great service."

Conroy added that the opposition said it supported the satellite aspect of the NBN.