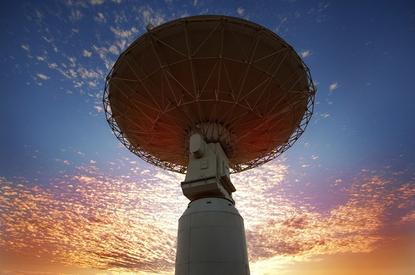 One of the Australian SKA Pathfinder radio telescope dishes at dusk in Western Australia.

The Australian Square Kilometre Array Pathfinder (ASKAP) and Murchison Widefield Array (MWA) projects underway in Western Australia to map the universe are forecast to generate data amounts in the region of eight petabytes each year.

The ASKAP radio telescope is in demand with a galaxy census and black hole research among the projects planned for the next five years.

Meanwhile, the MWA radio telescope correlator will help researchers to explore the early stages of the evolution of the universe when the first stars and galaxies were being formed. In addition, the correlator will help astronomers identify the trajectory of solar storms, quadrupling the warning period currently provided by near-earth satellites.

To support the forecast amount of data generated, the Commonwealth Scientific and Indsutrial Research Organisation (CSIRO) and its joint venture partner iVEC selected SGI to provide the data management infrastructure at the Pawsey Supercomputing Centre.

The Centre will process the data from both radio telescope projects and other research areas including geothermal modelling and rock characterisation.

CSIRO purchased an SGI InfiniteStorage and UV 2000 offering which comprises disk storage systems and licences to support up to 100 petabytes of online storage that is virtualized across multiple performance tiers by DMF software.

SKA inches closer to delving into the big bang

For example, Pawsey Centre researchers will be able to visualise images in the order of four terabytes and manipulate the data in new ways.

The Centre is expected to be fully operational by October 2013 with researchers gaining early access before June.

“The first component to be heavily used will be the InfiniteStorage HSM as the radio astronomy community moves into the final testing phase for their apparatus and begins to stream significant volumes of data,” Gorga said.

“The reason they chose GPU over a conventional central processing unit was the sheer amount of processing that they plan to do in the future,” he said.

Aside from the Centre, SGI has worked with the Australian National University and provided a 10 petabyte data storage system.