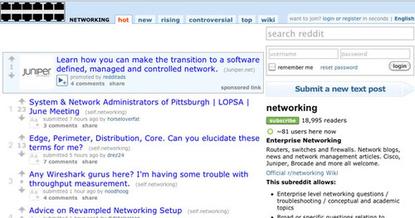 Screenshot of the Networking subreddit

Reddit is not just filled with pictures of cats and silly memes. Seriously. There's a lot of good content on the popular social news aggregator for network professionals whether you're focused on security, Windows, VoIP, IPv6 or a mixed bag.

[Why, Reddit even just held a rollicking Q&A with Ethernet co-inventor Bob Metcalfe to mark the 40th anniversary of the technology.]

Here's a rundown of some of the most useful subreddits geared toward network pros (well, OK, we couldn't resist sticking in a few fun ones). If you're looking for a much broader technology picture, then the 3 million subscriber strong Technology subreddit is your place.

1. As far as networking-related subreddits, the Networking one is the place to start, with nearly 19,000 subscribers (though often we find only a few dozen active). It is specifically focused on enterprise networking and recommends that those interested in home networking issues visit the robust Techsupport reddit instead (32,000 subscribers), or even the 24hoursupport subreddit.

The basic description of the Networking subreddit reads: "Routers, switches and firewalls. Network blogs, news and network management articles. Cisco, Juniper, Brocade and more all welcome." Hot discussion topics range from how much network pros are making to info about Cisco networking certifications to down and dirty fiber cabling and RADIUS talk.

2. The NetSecsubreddit focuses on information security and boasts around 73,000 "hackers." Rules are designed to keep the group serious, with images/screenshots/comics disallowed. A related subreddit, dubbed AskNetSec, allows for questions to be asked. Recent topics in the pure NetSec subreddit include Dissecting BlackBerry 10, news/analysis on Twitter's two-factor authentication scheme and WordPress attacks.

3. The CCNA subreddit is for Cisco Certified Network Associates or those working to obtain their CCNA. About 3,500 people subscribe to this subreddit, and as you would expect, the lots of questions and answers in here for those looking to get certified (such as, Can I successfully complete the hands-on labs using only 1 router and 1 switch?). This subreddit and a handful more related to Cisco are independent of the company.

4. The SysAdminsubreddit features a hodgepodge of system administration topics of interest to more than 42,000 subscribers. Discussions range from those about getting rid of computer viruses to tips about techiest and least techie tools that people use. For those job seeking, there's a Sysadminjobs subreddit as well.

5. The Applesubreddit, which is approaching 150,000 subscribers, focuses on news, rumors and discussion. The group is more focused on consumer issues than enterprise ones, but then again, that line has been blurred pretty well via BYOD, etc. There are plenty of other related Apple subreddits, too, including AppleHelp for technical questions and Apple II for old-schoolers.

6. The Windowssubreddit is a good place to start on Microsoft topics from Windows 7 to Xbox, though note that there are a handful of related subreddits, including those that zero in on products like Azure and Windows 8.

7. The Linux subreddit, for those of you embracing open source technologies, has 110,000 subscribers and lots of offshoots, such as subreddits for Linux noobs and Linux admins. Pressing questions raised in the Linux subreddit include: "How to mix Linux and Windows on your network?"

9. The Cordcutters subreddit specializes in info about ditching cable/satellite TV and streaming stuff for cheap or free. Um, Comcast and Verizon beware!

10 The iiiiiiitttttttttttt subreddit lets you release your IT rage for all the world to see via comics ("Tired of stupid customers? Having to deal with constant computer frustrations at work?"). No text posts here. Some 23,000 enraged technicians subscribe.

Bob Brown tracks network research in his Alpha Doggs blog and Facebook page, as well on Twitter and Google +.