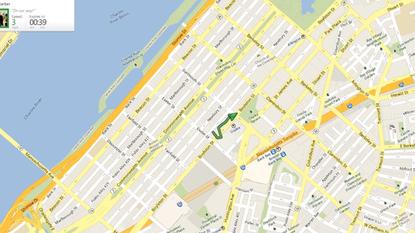 An example of the map that recipients of a Glympse might see.

Running late for a meet up with friends or an appointment? Share a location securely and for a limited time period with smartphone application Glympse. It's a free download for Android, iOS, Windows Phone and BlackBerry.

See the video version of the TechTip on YouTube.

First make sure GPS is enabled on the smartphone. Upon opening the app, select 'Send Glympse.' The app pulls from the phone's contact list so users can select an email or phone number. After selecting the recipient, choose how long the Glympse will last -- from 15 minutes to four hours. When the Glympse expires, users won't be able to track the account any longer. The creator of the Glympse can also set it to expire upon arrival at the destination.

Once the Glympse has been set, the sender can cancel the Glympse prematurely, extend it in 15-minute increments or modify it by adding or changing a destination.

Nick Barber covers general technology news in both text and video for IDG News Service. E-mail him at Nick_Barber@idg.com and follow him on Twitter at @nickjb.