Threats and opportunities from faster, better predictive analytics are highlighted in this year’s SAS Forum. 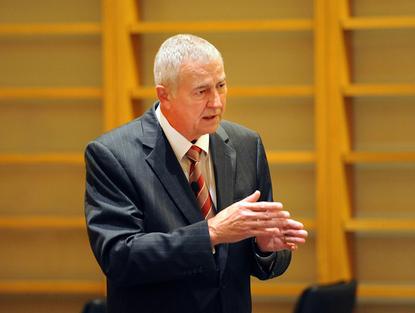 Faster and better predictive analytics are enabling organisations to rethink their business models, beat the competition, and make real-time decisions.

But these opportunities likewise highlight the need to balance data management with privacy, speakers at this year’s SAS Forum pointed out.

Analytics can help you rethink the way you do business Goodnight said in his keynote at the event in Sydney.

“Faster response times mean decisions can be made into near real-time no matter what size of your data,” said Goodnight, who founded the business analytics software company 37 years ago.

“While computers have been getting smaller, data has been getting bigger,” he noted. Today, data is constantly being generated from internet activity and from sensors. “The volume can be overwhelming.”

Shifts in the global economy are driving the need for economic transformation in New Zealand, not just incremental change, Bowie said. “If you can’t get value from it, big data is just big cost.”

Jim Davis, chief marketing officer at SAS, said the past three to five years have shown the spike in demand for data.

Everybody wants to make decisions based on decisions, based on facts, Davis said. “That means complexity of what we are asking from data has increased dramatically.

“We all want it quicker, we can’t wait a day or an hour or five minutes to get an answer,” Davis said.

He notes another change is the critical information in social networks that has to be incorporated with traditional sources of data.

At the same time the definition of big data varies. “Nobody will admit they have small data,” he said.

The term does not refer to size but simply as data that has exceeded the processing capacity of conventional database relational management systems, Davis said.

Analytics also gets the same treatment as big data. “Everybody says they have some form of analytics.”

There are, two buckets of analytics: Reactive analytics, which include alerts and standard reports; and proactive analytics, including predictive modeling (which customers will leave or respond to a campaign), and forecasting.

The point of intersection between large data and proactive analytics is the “sweet spot”, says Davis.

Thus big analytics is much more important than big data. It does not mean you have tremendous amount of data but you are getting answers almost instantly, says Davis.

“The data is out there, we should be able to use it.”

He says there is so much “noise” in the marketplace. “We need to understand how to be a bit more focused on our efforts and get a better return on that noise”.

“You have the opportunity to change the way you do business before your competitor does.”

A panel discussion at the forum highlighted the balancing act between data and privacy when the analysis is used for marketing.

There is a fine line between relevant and being overtargetted by marketing said Jodie Sangster, CEO of the Association for Data-driven Marketing and Advertising.

“You can’t abuse the technology,” said SAS's Davis. “Technology is incredibly powerful, you have to realise the potential benefits; we have to be careful not to abuse it.”

At the same time Davis said marketing today has the best focus group out there – social media.

Having focus groups in one room is one of the most ridiculous things today, he said. “You get people who have time to go to these things and need money for lunch.”

“If you use data effectively, you are going to be very successful,” said David Kirk, Trade Me CEO and one of the speakers at the forum’s trans-Tasman business panel.

Your competitors may be using data to acquire customers, manage the business more productively and build new products, according to Kirk.

In the case of Trade Me, it is easy for New Zealanders to buy from anywhere in the world so offering great service to suppliers including ability to understand the data on how the business is performing in the trading platform is important. On the demand side, he says, it is important to be “as competitive as Amazon” in recommendations and management of the purchase experience.

Michael Harte, chief information officer at Commonwealth Bank of Australia, said bank uses predictive analytics to look at a person’s circumstance. “We can almost predict with 99 per cent accuracy that they are coming into difficulty. We communicate with them, help them around their spending and saving so they do not get into a default situation.”

This is in contrast with the last round of financial crisis, where a whole lot of products were pushed on people “who did not need it and couldn’t afford it.”

The ministry uses analytics to implement an “investment approach”, using analytics to target resources to areas where it will get the best value. “This is about long term change for long term gain,” he said.

Warner said the ministry has decades of “cradle-to-grave data”. The challenge is using that data to improve service.

He says in the early '70s, there were around 50,000 people on benefits. Today, there are 260,000, reflecting an absolute exponential growth in numbers.

The lifetime cost of the current number of people on benefit is estimated to be $78 billion, a huge forward liability for government, he said.

The emphasis now is on reducing long-term benefit dependency.

We now see a third generation of benefits dependence – meaning government benefit is their source of income, he said.

“We have reached a point where we are looking at a paradigm shift and analytics will be at the centre of that.”

The ministry is trying to compare that data with other agencies to work out how it can best serve those who need it most, he said.

For instance, the Ministry of Education has data that 60,000 kids leave school. Records project 15,000 of these children are at risk to become clients of MSD.

He says 7500 of these youth are already enrolled into NEET (not in employment, education or training) service.

He said this is an issue that goes beyond New Zealand. The World Bank has estimated over a quarter of the world’s population aged 15 to 24 are not in education, training, or employment.

These youth “with nothing to do” can lead to social and economic problems. “This is something all of us have to deal with.”

His advice for organisations taking a similar step is to “start something”.

Have a vision, start on a small pilot and build on that, Warner said. Low cost failure is about findings things that do not work, stopping them and trying something else.

He said he has seen a lot of organisations go into a “paralysis by design phase” where people are designing the perfect state, taking into account every possible permutation.

He stressed it is incumbent for government agencies to show data is safe and secure.

He said there have been incidents of data being accidentally passed on to others, referring to recent cases of documents with identifiable data being emailed to people. It is a huge challenge for government agencies to demonstrate and show we are going to look after data, he added.

The government is a large decision-making engine, said James Mansell, director of innovation and strategy at the MSD.

The status quo is having data in silos. This is great for efficiency but poor for tracking people’s outcomes and driving value, he said.

The focus on return on investment requires joining the data in silos to get a people-centred view, he said. You need a team of advanced analytics across whole of government, who can move from vertical silo business to “whole of government analytics”.

Shared data will provide the competitive advantage to the country that builds it well, he said. “This isn’t about analytics – you are changing the model for government.”

Divina Paredes attended the SAS Forum 2013 in Sydney as a guest of SAS.