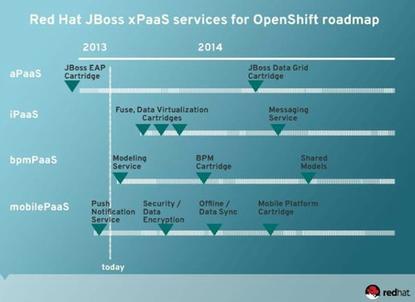 In a move to jump ahead of other PaaS (platform as a service) providers in the enterprise space, Red Hat will augment its OpenShift offering with a suite of middleware to ease the process of deploying cloud-based applications.

"The needs of a traditional enterprise developer go beyond what a person writing a simple Web app needs," said Jim Whitehurst, CEO of Red Hat. "They need orchestration, mediation, messaging, integration. No PaaS offers all those services today. We have those technologies in our JBoss portfolio."

Over the course of the next year, Red Hat will introduce new services into OpenShift for messaging, for running server-based applications, for business process modeling and for communicating with mobile clients. The technology will be used in Red Hat's JBoss suite of middleware software.

Such services, which Red Hat calls xPaaS, will be available to use as cartridges alongside OpenShift's selection of languages, databases and frameworks, which include JavaScript, PHP, Python, Java, MySQL, PostgreSQL and node.js.

While competitors such as Heroku, Google App Engine, and Cloud Foundry have been adding to their arsenals of supported languages and developer tools, Red Hat's introduction of enterprise middleware services is relatively novel for the PaaS space. Though it is not unprecedented: On Monday, Java PaaS provider CloudBees launched a set of tools that would allow enterprises to link on-premise applications with their CloudBees deployments, through the use of VPN (virtual private networking), authentication mechanisms and publish-and-subscribe tools.

The core JBoss application server will be the first cartridge made available on OpenShift. It can cover traditional EAP (enterprise application platform) duties such as handling transactions and persistence.

The messaging cartridge will be based on Red Hat's Fuse enterprise service bus (ESB), which was built from the Apache Camel open source project.

A BPM (Business Process Management) cartridge will be based on technology Red Hat acquired in its 2012 purchase of Polymita. It will provide a way to perform business activity monitoring, process simulation, dynamic workflow configuration and other functionality for understanding how applications operate.

Red Hat will also build new software for OpenShift to help applications communicate with mobile devices. It will offer push notifications, which have been a burdensome feature for developers to write from scratch.