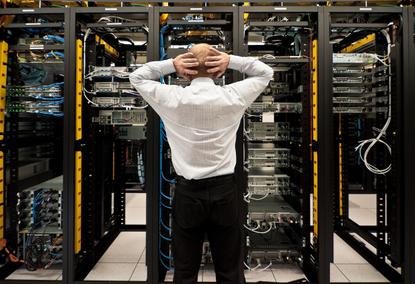 Lack of governance, bad reporting, constantly changing specifications, and security breaches: Here are some of the most damaging enterprise IT disasters in recent years in Australia and overseas.

In 2012, only 39 per cent of all projects included in Standish Group’s 2012 Chaos report succeeded by being delivered on time and budget with the required features and functions. This is an increase from a year earlier but it still paints a pretty bleak picture of global IT project successes and failures across just under 50,000 global initiatives.

Sadly, 18 per cent of these projects failed because they were cancelled prior to completion and delivered or never used, according to the latest Chaos report.

Some of those failures were no doubt spectacular — though we doubt many of them are as spectacular as the list below of the top 10 enterprise IT disasters that have taken place in recent years in Australia and abroad.

UK broadcaster, the BBC launched its Digital Media Initiative in 2008 in an attempt to build a digital production system to change the way workers created, used and shared audio and video content.

The project was halted in mid-2012 after the BBC Trust launched an internal review. It engaged PwC at a cost of £250,000 to review the management and reporting of the initiative.

It found that the BBC showed serious weakness in project management and reporting, and a crippling lack of focus on business change. Almost £100 million was spent on the project. In January this year, the broadcaster fired its CTO John Linwood over the debacle.

In June 2011, domain registrar Distribute.IT was hit with an attack on its servers, causing around 4800 websites and data relating to 4000 customers to be lost.

A truck driver from Cowra in NSW was charged for the alleged attack on Distribute.IT as well as other attacks on the University of Sydney and NBN Co retail customer, Platform Networks.

The attack was so damaging, it put Distribute.IT out of business. The company was subsequently acquired by Netregistry Group.

In mid-2008, the Victorian government unveiled its $360 million HealthSMART program to modernise and replace IT systems across the Victorian public health sector.

As of October last year, implementation costs for the HealthSMART clinical ICT system rollout had blown out to $145.3 million or 150 per cent more than the original budget of $58.3 million, according to an Auditor-General’s report.

The Auditor-General’s audit report also suggested that the absence of appropriate controls and effective mitigations at certain sites could pose serious safety risks to patients.

The Victorian government’s myki public transport smart card system has been plagued over the years with delays and cost blowouts.

The system – along with HealthSMART and the Regional Rail Link – contributed to around $2 billion in cost overruns for the Victorian government. Myki was expected to have cost $1.4 billion alone.

Early in 2003, it was reported that the system was not particularly user-friendly and customers were waiting up to three days for funds to be transferred from the website to their cards.

California terminated a contract with SAP last February for the $371 million rollout of ERP software intended to overhaul the state’s payroll system. The project was plagued with huge delays and cost blowouts.

The project dates back to 2005 and has cost the state’s taxpayers $250 million. SAP was engaged in 2010 after the original supplier BearingPoint, was fired.

In November last year, California’s state controller filed suit against SAP, saying the system had cost taxpayers a lot of money and has never worked properly.

The lawsuit stated: “After three years and paying SAP approximately $50 million to integrate its own software into a new payroll and benefits system for the state of California, all the [state controller’s office] has to show for its investment is a system that could not get the payroll right even once over an eight-month period for a pilot group of only 1,500 employees.”

Deloitte Consulting and SAP were also sued by Marin County in California in a separate case related to a software rollout.

The Obama administration’s malfunctioning Healthcare.gov insurance-shopping website was a central part of the US government's controversial Obamacare program. The website went live in October 1 last year and only 30 per cent of users were able to sign up for healthcare services.

Since then, the US government has worked to fix the system but by December 2013, government officials said 25 per cent of applications sent from the site to private insurers contained errors that were caused by the website. This was after officials had expected the site to be running smoothly by end of November.

An integrated cargo system at Australian Customs Service, which went live in October 2005, was a catastrophic failure.

The move to production of the Imports module of Customs' project was deemed a failure of corporate governance of IT. Cargo was left unprocessed, shipments over a Christmas period were delayed, and although individual parts of the system worked, it failed as a whole.

Customs sank between $200 million and $250 million into the project.

Next up: Our top three IT disasters

Support for Queensland Health’s LATTICE system expired in September 2008 and the agency – which is responsible for paying around 78,000 staff and $210 million in salaries every two weeks – was in dire need of a replacement system.

The project was in trouble from the start. Between early 2008 and March 2010, IBM Australia, the prime contractor, submitted 47 change requests to the government’s shared services provider CorpTech.

These requests were apparently a result of poorly defined business requirements created at the start of the project. But CorpTech approved the requests.

The Queensland auditor-general’s report stated: ‘During October 2008, detailed planning revealed that the program had been severely underestimated, with the consequence that its revised implementation cost estimates significantly exceeded the original tender proposal.”

This train wreck of a project, which went live in 2010, left thousands of workers unpaid and underpaid for weeks. A total of $120 million was overpaid to more than 61,000 staff. In January, Queensland Health staff said they were committed to handing back overpayments worth $3.5 million

This debacle will eventually cost the state of Queensland $1.2 billion over eight years.

Other Queensland government IT projects are also currently lagging.

Now for something a little different. For the past 37 years, around 600 staff employed by the Office of Personnel Management in the United States have been processing the retirement papers of US government employees.

Since 1977, US government administrators have reportedly shelled out more than $100 million in an attempt to automate and digitise this paper-based process by introducing technology. They have failed.

Around $25 million was spent between 1987 and 1996 before the plug was pulled because a new system didn't work. The government tried again in 1997, initially attempting to revamp the system using internal resources before hiring contractors for a system that would be ready by 2008.

But by 2007, the Retirement Systems Modernization Program was not working with a quoted 18 per cent success rate during "stress tests."

In a fascinating article published last month in the The Washington Post Robert Danbeck, who was overseeing this project at the time, said the system "had trouble synthesising information from so many sources and calculations based on so many laws."

The system eventually went live in early 2008 before breaking and being scrapped. More than $106 million was spent and the paper-based filing system remains.

Our number one project disaster is the massive £12 billion plan to create the world’s largest civilian database linking all parts of the UK’s National Health Service, initially launched in 2002. The project was in disarray from the beginning, missing initial deadlines in 2007, and eventually being scrapped by the UK government in September 2011.

The nine-year debacle, under the National Programme for IT, was way over cost and years behind schedule due to technical issues, issues with vendors and constantly changing system specifications.

In early 2012, one of the primary suppliers, CSC made a $1.49 billion write-off against the botched project. A report last year claimed the failed project had cost UK taxpayers £10bn to date with the final bill expected to be "several hundreds of millions of pounds higher."