How Super Retail Group is dealing with digital disruption 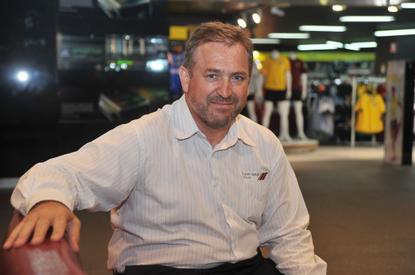 If you’ve ever worked for a retailer, you’ll know one of the first things employees are taught is that the customer is always right.

This desire to keep the customer happy is also top of mind for Super Retail Group’s general manager of group information services (IS), Alan Hesketh. And for him, that commitment doesn’t just cover the in-store experience, it’s also extending across online interactions too.

Hesketh heads up Super Retail Group’s IT team, which operates as a shared function to its retail divisions across Australia and New Zealand. These divisions are split into auto and commercial, leisure, and sports, and include well-known brands such as Supercheap Auto, Ray’s Outdoors, Workout World and Amart.

IT is tasked not only with keeping operations running, but also driving better omni-channel experiences for end customers. It’s a job that has led to significant transformation in recent years, as well as a cultural shift in how the business operates.

Hesketh is well-aware that the rise of ecommerce and mobile connectivity has transformed the way retailers interact with the end customer, as well as put control firmly into the consumer’s hands.

“We’ve done a lot of work around the omni-channel experience to help our customers shop in the way they want,” he tells CIO. “Whether they want to buy online, click and collect in-store or visit a physical location, we've got that capability across all the brands.”

Hesketh is no stranger to taking on ambitious projects, and his experience as an IT and business leader is diverse.

Hesketh grew up in New Zealand and completed a Bachelor of Science in Information Services at a time when mathematical operations research was required knowledge. He claims a lot of the high-powered modelling his group does today for the business taps into these early learnt skills.

After a stint in analyst programming, he joined Databank in New Zealand, a shared services provider for banks across the Tasman, working on the early support program for IBM’s first relational database release, DV2.

He moved into consulting, then joined Unilever in 1990 and spent the next 10 years working with the consumer goods company first in New Zealand, then overseas.

He relocated to South Africa to run Unilever’s IT for three years, then spent a year as head of IT for the Africa Business Group. The opportunity proved an eye-opening experience, and Hesketh says he visited several “very interesting places” on the job.

“South Africa was great, but anything north of there was a challenge - a lot of the plantations and factories were getting international and reliable email for the first time,” he recalls.

Unilever sent Hesketh next to the UK, first to run IT for European Foods, then to set up the global infrastructure organisation. While he enjoyed the leadership roles, the travel became an issue and he made the decision to move to Sydney.

The next step was a one-year gig with NRMA as acting CIO, followed by a CIO’s post at Brisbane City Council.

“The Lord Mayor at the time, Jim Soorley, had great ideas about a virtual city supporting the physical city,” Hesketh says of the role. “There were very diverse requirements - from the traditional kind of roads rate and rubbish to social investments and digital.”

An offer with New Zealand’s multi-billion dollar supermarket giant, Progressive Enterprises, popped up and Hesketh jumped at it. After two years, the group was taken over by Woolworths in 2007.

Hesketh switched to the NZ Ministry of Health as deputy director general for the Information Director, which covered a broad portfolio of projects worth billions, including health IT policy. A government change put paid to that role, and Hesketh was approached by the Super Retail Group and moved back to Brisbane.

Given his focus on business-led technology investment, it’s not surprising Hesketh has spent four years already with Super Retail Group. When he joined in 2010, the group had 35 IT staff and turned over $900 million. At the end of last financial year, the group reported just over $2 billion and IT’s headcount exceeded 70.

A major contributor to this rapid expansion was the acquisition of Rebel Sport in late 2011, swelling store numbers to 620 and staff to more than 10,000. The growth also presented a much more complex supply chain and significant IT change was necessary, Hesketh says.

To meet the needs of the bigger organisation, as well as the rising demand for omni-channel capabilities, the first step was centralising information flow.

Historically, Super Retail Group’s IT team provided 24-hour updates to the core systems, then pushed down any new price and product range changes to a store level. Data latency was a huge issue as a result.

Customer details were also held at a store level, meaning an individual who shopped in more than one store in one day wouldn’t be recognised.

The answer was a centralised core platform managed by the IS team. “Where we’re talking about something specific to the [sales] channel, such as data about a customer in the call centre or team member experience in-store, we do that in a way we can distribute and target specifically for those different requirements,” Hesketh says.

“Our point-of-sale terminals are in essence a checkout function. From head office, we deliver all of our store managers their daily sales and stock positions, and the pricing and customer details, using a single system.”

Thanks to the new infrastructure, data latency has gone down to less than 20 minutes, Hesketh says.

“As sales happen in the store, they're fed back into our core systems so they update both our supply chain systems and the data warehouse we use. This allows us to get real-time sales information throughout the day and on-stock position.”

It’s a big internal cultural change, and a project driven by the group’s corporate strategy of focusing on the customer experience, Hesketh says.

As chief of group IT, Hesketh sits on the executive leadership team and is involved in the development of corporate strategy. He points out that while the transformation project required technical capability to be a success, it also wouldn’t have worked without the change management processes to go with it.

To ensure governance programs were appropriate, the IS team set up a product program management group under a general manager for business change. It used PRINCE2 methodology to run the program.

“Without the stores actually going through the process of understanding how these changes affected their jobs, and having the leadership out there in retail leading that change, none of it would've stuck,” Hesketh adds. “This was very much a corporate strategy and one that again, combined governance with delivering actual change.”

Next up: Cost versus value

Of course any conversation about transformation inevitably involves cost. At Super Retail Group, IT spend has gone up significantly in the last few years, partly as a result of growth, and partly because the business is operating near real-time, meaning information intensity is much higher.

Hesketh doesn’t believe CIOs will ever get away from the cost discussion and says it’s even more prevalent when IT is run as a shared service. “We deliver the capability and get the cost, but the benefit is often delivered in a different part of the business and they get the value,” he admits.

“The challenge has always been to match up the value being contributed, to the additional cost we're actually bearing.”

Hesketh achieves this by focusing on the customer experience, business benefits, and supply-chain capabilities being provided by IT. As a company, Super Retail Group also employs an overriding metric called ‘return on capital’, which positions capital against the returns generated and how those relate back into the different processes.

“I'm not being told you're spending too much, what I am asked is to show that the costs are appropriate,” Hesketh comments. “How IT can alter the business’ return through changes of processes or capability improvements is an important thing to demonstrate.”

Within the IS team, there are also three key areas to juggle: Keeping the business running; omni-channel capability; and improving customer experience.

Another piece of the puzzle is developing team member capabilities to better support both the business and the end customer as their needs change. Hesketh explains one of the group’s current corporate strategies is around team member engagement and retention.

“As a retailer we have quite a high turnover, but retention today sits at about 75 per cent,” he says. “Understanding what sorts of people enjoy working here, if they want to stay, and how we make sure we're giving them what they need to deliver their job properly, is critical.”

In line with the group’s stronger customer-centricity, Hesketh stresses the importance of also improving the staff experience. One way IT is doing this is through a federated portal, which sits on top of its transaction systems and allows in-store staff to monitor tasks through customisable tabs.

Another focus is what Hesketh calls the ‘rhythm’ of the system versus staff usage. “If a staff member is at the checkout, each scan has to be under half a second for us, whereas in supermarkets performance is much more intense and probably needs to 0.10 of a second,” he explains.

“If we're looking at doing a parts search, however, response times may be up to four or five seconds depending on what a staff member is doing with a customer. So it's understanding the rhythm of the task and making sure the performance of our systems meets that.”

Having invested heavily in its architecture, Super Retail Group is looking to leverage capabilities further. “We have an awful lot of capability and the thing we're looking at doing is saying, OK, how do we really get returns from that?” Hesketh says.

Mobility is another game-changer, both for staff enablement as well as for customers. Super Retail Group is in midst of an 18-month program to roll out mobile devices and Wi-Fi capability across stores as a way of enhancing customer shopping experiences and adding to its omni-channel offering, Hesketh says.

“The idea is to be able to provide a lot more digital information to team members,” he says. Customers will also be able to connect in-store using Wi-Fi. “Consumers are doing up to 70 per cent of their research online before coming into store today, and we have to make sure our team members have access to the same information that customers do as part of that experience.”

When asked what the modern CIO looks like today, Hesketh notes the increased business contribution the role must make.

“The CIO has to deliver that crossover between technology and value,” he claims. “It comes back to trying to understand how new technologies, new opportunities, and the way technology's being used, impact the business and customer.

“If I look at the way businesses use IT, there's two major things I think about. One is how time and distance have changed as a result of technology. There has been this huge compression of business cycles and therefore our ability to respond and see what’s going on.

“The other change is the information intensity in business. The amount of data available today is one thing; being able to get it in front of people in a way that's usable and decipherable so that we can understand it and see the patterns is another.

“That has all sorts of other challenges in terms of people’s ability to use information to make good decisions. It’s a whole different approach to just saying ‘what's our sales trend over the last six months’.”

The danger for any CIO is not recognising the balance between keeping the business running, and leading change, Hesketh concludes. “The big risk is losing sight of how the organisation you're working in establishes value. If we stay focused on that contribution as CIOs, we have a chance to succeed.”