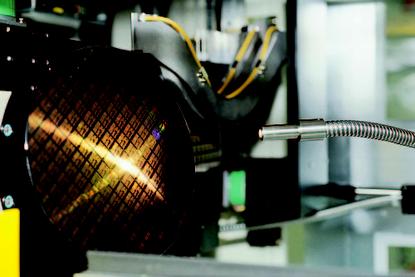 The company's net income in the period reached NT$59.7 billion (US$2 billion), an increase of 15.2 percent from a year ago, it said on Wednesday. Revenue met the upper end of TSMC's projections, growing 17.4 percent year-on-year to NT$183 billion.

TSMC, the world's largest contract chip maker, builds processors for Qualcomm, Nvidia and Apple, and has been posting strong earnings on booming sales for smartphones and tablets. This year, the company expects to maintain "double-digit growth" as it deploys more-advanced chip-making technology to build faster and more power-efficient processors.

The 20-nanometer process will make up 10 percent of the company's chip sales in the third quarter, and 20 percent in the fourth, Chang said.

Demand for TSMC's existing 28-nanometer manufacturing process has also been rising, helping the company remain competitive with rival foundries. In the second quarter, 28-nanometer chips made up 37 percent of the company's total chip sales.

TSMC expects its third quarter revenue to reach between NT$206 billion and NT$209 billion, up from NT$163 billion a year ago.