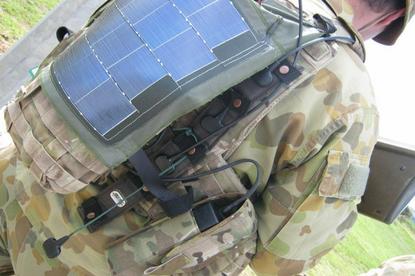 Image courtesy of Department of Defence

Solar cells that can be stitched into clothing are going to replace heavy batteries soldiers need to carry on top of all their equipment while out in the field.

The Australian National University (ANU) developed SLIVER solar cells, which are strips of silicon about 60 millimeters long, one and half millimeters wide and about 35 micrometers thick (thinner than a human hair). Each cell has a total area of about a square centimeter.

Wires that look and feel like fabric are also embedded into clothing to connect the cells to the gadgets soldiers carry such as night-vision goggles, lights, GPS devices and communication systems.

Packs of about 600 cells that are joined to make a A4 sized sheet solar panel can be embedded into a soldier’s backpack, helmet or jacket – wherever there’s more exposure to sunlight.

“They are encapsulated in plastic. Because the plastic is thin and the solar cells are thin, it’s all flexible and you can stitch it into the fabric to make it wearable,” explained professor Andrew Blakers director, ANU Centre for Sustainable Energy Systems.

The power to weight ratio is 200 watts per kilogram, with a square meter solar panel producing about 130 watts.

“What the soldiers found when they were testing it was on a sunny day, the panels that were on their backs covered all their real time energy needs, plus charged their batteries. And on a cloudy day it wouldn’t charge their batteries but it would cover most of their electrical needs,” Blakers said.

Read: Technology made for war: “We call [soldiers] Christmas trees at times because they have so much equipment and gadgetry on them,” says DSTO’s Alex Zelinsky

The cells were trialed by a few soldiers in Adelaide over a 72-hour training mission, with the ANU aiming to commercialise the technology in about three years’ time, Blakers said.

“There are significant non-military applications, too. If you are a fisherman, or you ski, or a bushwalker, or a climber, and you need electrical power in the middle of nowhere for weeks on end, then solar is the way to go.”

Blakers added that this technology is also being targeted to soldiers in Afghanistan, as other types of power sources and batteries can be prone to exploding, especially in the battle field.

The project is part of the Soldier Integrated Power System (SIPS), which is a collaboration between the ANU, Commonwealth Scientific and Industrial Research Organisation (CSIRO) and Tectonica Australia.

A $2.3 million contract was awarded under round 15 for the SIPS by the Capability and Technology Demonstrator (CTD) Program, managed by the Defence Science and Technology Organisation.