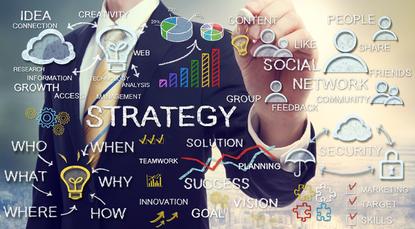 Strategy is a term often used and everyone agrees, is incredibly important. In fact, it’s so important many of us have paid “big bucks” to develop a strategy.

I’ve been in roles where we had several weeks of “strategy” meetings, with people flown in from around the country. There were heated discussions and after several months the strategy was completed.Theoretically, things should have moved on from there, but they didn’t.

On reflection, there were several reasons why this process was not successful but all came down to the fact that we hadn’t followed the steps necessary for implementing a strategy. Here are my six main steps to succeeding with a strategy.

Firstly, it is essential to identify the Now State of the firm and associated issues. This is no simple task and often takes significant analysis, insight and involvement from various groups within the organisation.

Unfortunately, many miss this step as senior leaders believe they know what the problems are and go from there. Alternatively, they seek or are provided with limited information and the results are skewed. Again, this affects the entire strategy.

The second step is identifying where the firm wants to be, or the Future State. Simple enough, but it does require careful consideration. You are basically trying to future proof the organisation and set some serious stretch goals.

This requires extensive research, collaboration and courage from the leadership team, because it may mean significant changes in direction, behaviours, culture, resourcing and more.

The third step is the Planning Stage. Initially, you perform a good old-fashioned gap analysis and determine what the distance is from your current to future state. Generally,this is more enthusiastically embraced by those involved, because it is trying to solve the issues previously identified.

They will often feel more comfortable or in control once they are tasked with determining what actions are required to achieve the future state. Communication and collaboration are essential at all stages, but identifying who is doing what and by when, is crucial.

Often when this is completed, there is much celebrating, because the strategy is formed. However, there are two more important steps to be accomplished before popping the champagne.

One of these is the Implementation Stage. This is where you hold people accountable and responsible for the action plans developed previously. This obviously makes people nervous and they’ll often query their plans and try to reinvent steps two and three. It’s vital for the leadership team to manage to the plans and resource accordingly.

The other step is the Review Stage. The name says it all: This involves reviewing the progress being made. It’s imperative you reflect on the strategy and associated plans and determine if changes are required.

Adjustments are to be expected and will be necessary from lessons learned, but be courageous in making the changes and driving progress. Regular revision is essential, otherwise the strategy will probably never be fully realised.

I said it was a six-step process, so why did I only give you five? Because the overall step with any strategy is Change Management. I’m a passionate believer in people and communication as key to any successful change and implementing a strategy is certainly that.

So communicate, communicate and then communicate some more. Involve your people so they are engaged, empowered and ultimately will be a part of delivering the plans.

I have just taken up a new role and currently working on step four, the implementation phase and change management. Certainly this time I am approaching it a lot differently and using the lessons learned. I am just one of many living the strategy dream.

Fi Slaven is a business strategist and service-orientated transformational executive. She is the general manager for William Buck Victoria, secretary of the Victorian ICT for Women network and director of the Go Girl Go for IT expo. Fi was also recently the recipient of the 2014 iAward’s for National and Victorian ICT Woman of the Year for her contributions to the industry.