MOOCs deliver robots for everyone

Want to use Lego to make robots? Read on. 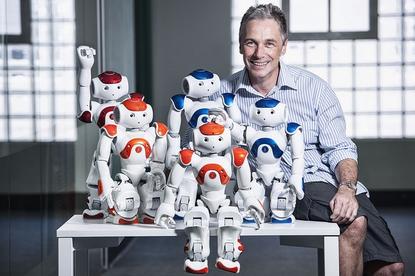 Professor Peter Corke from QUT is a leading roboticist who has developed the world's first robotics MOOCs designed for undergraduates. Credit: Erika Fish

The Queensland University of Technology (QUT) aims to bring robots to the masses through two massive open online courses (MOOCs) on robotics.

By virtue of being MOOCs, the courses – Introduction to Robotics and Robotic Vision – will be free and open to an unlimited number of students worldwide.

The courses have been designed for undergraduate engineers but QUT said they are suitable for anyone with a strong interest in robotics. They are the first ever developed for people with undergraduate STEM knowledge, and the first robotics and vision MOOCs to be offered globally, according to the school.

“While the MOOCs might attract some high school STEM stars and skilled armchair roboticists, I expect most of the students will be undergraduates, perhaps studying engineering or computer science at a university that doesn't itself have a strong robotics program,” said Professor Peter Corke, who created the course and is the director of the ARC Centre of Excellence for Robotic Vision.

“It could also be helpful for STEM professionals looking to expand their skill set – with big players like Google, Apple and Boeing pouring hundreds of billions of dollars into robotics and automation, it's an industry that'll be screaming for workers into the near future.”

Here are the course descriptions:

QUT's Introduction to Robotics MOOC is designed to develop the fundamental mathematics and algorithm skills that underpin robotics, including representation of pose and motion, kinematics, dynamics and control. As an optional practical assignment, students with a LEGO Mindstorm kit will be able to build a simple robot arm and write the control software for it.

The Robotic Vision MOOC takes that knowledge a step further, introducing students to the evolving field of computer vision, learning how images are formed, and fundamental algorithms to process images in a computer to extract information such as the colour, size, shape and position of objects in the world. As an optional practical assignment students can build an intelligent vision system that can recognise objects of different colours and shapes.

“They're certainly not going to be walk in the park,” Corke warned of the courses, which were developed over 16 months with QUT’s eLearning Services team. “Both MOOCs involve theory, mathematics and programming.”

Corke said he became interested in the possibilities of MOOCs after he broke his knee and had to do his lectures remotely. After the semester, he uploaded them to YouTube and received a massive response.

"I was really surprised by the interest those lectures generated – more than 70,000 views, with one lecture alone viewed 32,000 times,” he said.

"That made me realise just how many people are genuinely interested in robotics and it got me thinking about how I might be able to deliver structured course content online.”

MOOCs allow robotics to be taught without traditional limitations of the education system, he said.

“Once upon a time we needed a lecture theatre and a lab full of hardware to teach robotics but in this digital age we don't always need that resource-intensive, bricks-and-mortar model to deliver a strong robotics course,” he said.

“These days we can teach mechatronics with LEGO kits at home rather than labs, and I find that a truly exciting prospect.”