The card can hold around 20 hours of high-def video 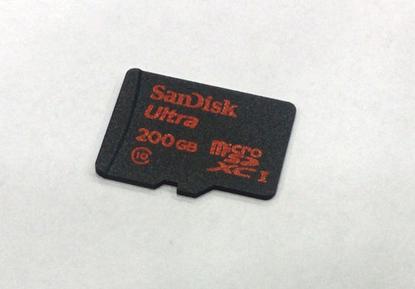 SanDisk has managed to cram 200GB of memory into a MicroSD card.

The new card is a 56 per cent jump on the current highest capacity MicroSD, a 128GB card.

SanDisk said it managed the higher capacity by using a proprietary design and production process that allows for more bits of memory per chip.

It didn't disclose details of the process, but the capacity of the card gives a clue as to how close it has come to the current limits of manufacturing technology.

Memory chips are typically sized in powers of 2, with steps such as 16GB, 32GB, 64GB and 128GB. Keeping that patten would result in a 256GB chip, but it appears SanDisk wasn't able to do that. Instead, it settled for 200MB.

That's not to take away from the company's development work. Fitting that much storage on a card the size of a fingernail is big achievement.

The card supports data transfer at up to 90MB per second, or around 1200 photos per minute.

It will be available worldwide in the second quarter for $US400.