The Upload: Your tech news briefing for Thursday, March 12 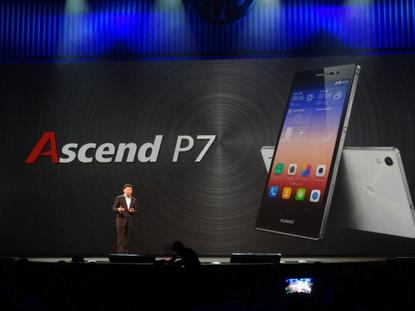 Richard Yu, Chief Executive Officer of the Consumer Business Group at Huawei Technologies, at the launch of the Ascend P7

High-end phones on the way with LG, Huawei next in line

If you were disappointed with the shortage of new flagship smartphones at Mobile World Congress last week, just hang on until next month. LG Electronics is expected to announce the highly anticipated successor to its good-looking G3 -- the G4? -- that may sport a 1620 x 2880 pixel display. Huawei has started to post teasers for an event on April 8 for its P8, likely to offer a screen that's a bit larger than the Ascend P7's 5 inches, better battery life and an improved camera. Even Sony, which badly needs a big hit, may jump in the fray, with the Xperia Z4.

Apple struggled mightily to fix an outage that affected key e-commerce and productivity services for hours on Wednesday, including iTunes, iCloud and the App Store.

The problems began at around 5 a.m. in the eastern U.S. and weren't fully resolved until 11 hours later. Apple blamed the outage on an internal DNS error. Also affected: the iBooks Store. ZDnet estimated that Apple lost around US$2.2 million per hour in revenue during the outage.

European legislators want the European Commission to accelerate the pace of its investigation into possible anti-trust violations by Google. A large majority in Parliament endorsed a scathing study penned by one of its members that says the Commission risks losing its cred on digital issues if the four-year probe keeps dragging on. The investigation, the report says, "has achieved no demonstrable results" in its attempt to determine whether Google gives its own services preferential treatment in search results.

A judge has ruled that Facebook has to face a class-action suit from parents demanding refunds for unauthorized purchases by kids on its site. The plaintiffs argue that its policies don't do enough to protect minors (or really, the parents whose payment cards said minors might get their hands on). California law says contracts can be voided if they involve personal property the child does not own. The certified class includes potentially millions of Facebook users who were minors between 2008 and 2015.

Google has unveiled a new backup storage service that gives companies a cheaper way to store and archive data in volume. Cloud Storage Nearline is meant as an alternative to running in-house storage systems and also targets startups like mobile apps companies that need a way to store user data. The costs is just one cent per GB per month, and Google promises that the data can be retrieved within about three seconds.

Is a Lyft or Uber driver a contractor or employee?

Much of the entrepreneurial allure of the "sharing economy" is that companies can take a cut of fees paid to individual service providers without incurring the troublesome overhead of actually employing them -- but a case in California court questioning whether drivers for Lyft and Uber are contractors or employees may threaten that business model. On Wednesday, judges in two separate cases refused to dismiss suits brought by the drivers and referred them for jury trial. If the companies have to treat their drivers as employees, they will incur higher costs, and have to let them keep customers' tips.

A coalition including tech companies and digital rights advocates on Wednesday renewed their call for Congress to change a 29-year-old U.S. electronic privacy law called the Electronic Communications Privacy Act [ECPA]. They want all email and documents stored in the cloud to have the same privacy protections from police searches as newer files or paper records stored in a file cabinet. Right now, warrants aren't needed to go after digital files stored with a third party for more than 180 days.

Security researchers analyzing malware used by a sophisticated espionage group are finding more clues that point to the U.S. National Security Agency being behind it. Kaspersky Lab released an extensive report in February that detailed the attack techniques and malware tools used by the group, which it calls Equation, but stopped short of linking it to U.S. intelligence. But now, Kaspersky is publishing findings that include what look like NSA fingerprints.

How does the new, ultra-thin and light Apple MacBook handle? PC World takes it for a spin.

MySpace stopped being a relevant social network years ago, but there are lessons to be learned in its failure. The Guardian sat in on a talk by a former executive on what went wrong.