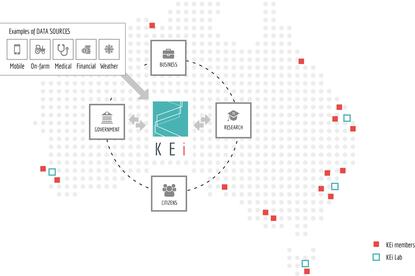 A new Knowledge Economy Institute (KEi) has launched to help put Australia at the forefront of the rapidly growing global digital economy.

The KEi - created by universities, data analytics and technology companies - was announced at an Australian Information Industry Association (AIIA) conference in Canberra by Paul Fletcher, parliamentary secretary to Malcolm Turnbull.

The Institute is expected to help business, government and researchers solve complex problems like world hunger and sustainable development, as well as increase competitiveness and create jobs.

Founding CEO Dr Mike Briers said that with the end of the mining boom, it’s vital Australia moves quickly to catch the next wave of data-driven innovation that will drive the future economy.

“Instead of mining minerals, we’ll be mining data – and the rewards are potentially just as great as during the mining boom,” Dr Briers said. “The possibilities are endless.”

By 2020 there will be 25 billion connected ‘things’ in use, according to analyst firm Gartner, generating unprecedented amounts of data and allowing us to see patterns and relationship that were previously invisible.

“Using that data to solve problems and create new jobs will be the one of the foundations of the global economy.”

Cisco estimated that this project will generate as much as $74 billion of value for Australia, and $19 trillion dollar globally. Within five years, the KEi aims to be a $60 million organisation that’s helped to create 100 new commercial applications and start-ups while working with business and universities on data research to boost productivity across Australia.

“By bringing together Australia’s leading universities, researchers and businesses, the KEi will help to ensure that Australia’s next economic boom is based on data, knowledge and innovation as part of the worldwide digital economy,” Dr Briers said.