The Upload: Your tech news briefing for Thursday, April 2 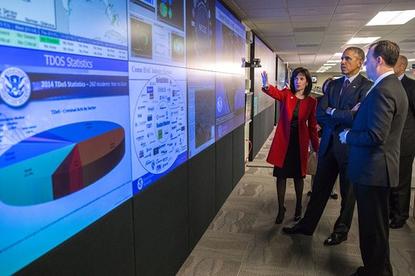 The White House has added another weapon to the U.S. government's arsenal in its fight against hackers, with an executive order signed by President Obama authorizing sanctions against hackers who harm critical infrastructure, or expose personal information and trade secrets. The order allows the government to block a person or organization's access to U.S. financial institutions and any property they have in the country.

Facebook has released a mobile app called Riff that lets people create short videos and then share them with friends. What elevates it from being a me-too entry is a strong collaborative twist that might help it beat out rival video creation and sharing apps like those from YouTube, Snapchat and Twitter. After you create a video in Riff, your Facebook friends can add to it, and then their friends can, and on and on -- with the widening social graph taking the content to unexpected places.

Uber Technologies said Wednesday that it has filed complaints with the European Commission against France, Germany and Spain for their efforts to ban its services. "This is supposed to be a single market," Uber's public policy head for the region told the Wall Street Journal, adding "What we're finding is that we're getting treated in completely different ways in different countries, and even within individual countries." But a Commission spokesman pointed out that while the body is examining Uber's complaints, regulations for transport services like taxis fall within the authority of individual EU countries.

A European antitrust investigation that seemed to be moving toward a settlement favorable to Google just last year appears to have taken a harsher turn for the search giant. The Wall Street Journal said that the European Commission is planning to move against Google in the coming weeks, and is asking companies that had submitted confidential information in the course of the probe for permission to publish some details of their complaints. The Journal cited antitrust experts as saying that indicates formal charges are in the works, which "sources" close to a number of news outlets have been promising for weeks.

Bankers look for bitcoin's digital dividend in the blockchain

Bitcoin backers haven't realized their vision of a thriving global marketplace where the cryptocurrency is the routinely used coin of the realm, but the financial industry remains fascinated by the underlying blockchain technology. The latest enthusiast is Swiss bank UBS, which will open a blockchain research lab in London to investigate how the public, decentralized online ledger which verifies transactions could be used in financial services, the Wall Street Journal reported.

Google, China NIC in a spat over bad certificates

China's central Internet administrator blasted Google on Thursday after it decided that Chrome, the world's number one browser, would no longer recognize digital certificates issued by the group. The search giant remains concerned about how CNNIC issued a certificate for Google domains to an IT company based in Egypt that misused it in a botched security test. The digital certificates are important to letting browsers -- and their users -- know if web sites are trustworthy or might lead them to malware. CNNIC, which is in charge of the .cn domain for the country, called Google's move "unacceptable and unintelligible."

This Barcelona startup gives you all the food that's fit to print.

As often as tech leaders proclaim they want to change the world, they're quiet on the controversial issues of the day. But in the rally against U.S. laws seen as anti-gay, they seem to have found a safe issue.