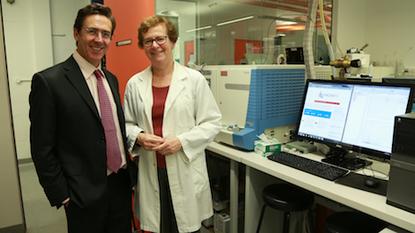 Dr Ian Gibson (left) has stepped down from Intersect Australia

Intersect’s founding CEO, Dr Ian Gibson, will step down from Australia’s largest research support agency in late April after six and a half years in the role.

During his tenure, Dr Gibson built the eResearch engineering and services base, securing funding for peta-scale research storage and cloud computing infrastructure to support NSW’s universities as well as the University of Canberra in the ACT.

“On the back of these investments, Ian built strategic partnerships and initiatives to deliver further benefits to university members,” said Intersect chairman and Emeritus Professor, Mark Wainwright.

“The new national medical data initiative, for instance, is a world first and stands to enable health and medical discoveries by sharing the dataset generated by dozens of universities, medical research institutes and state government health departments,” he said.

Dr Gibson said Intersect has delivered high quality services and a strong return-on-investment consistently for members since day one.

“More importantly, we have enabled many thousands of research outcomes across many disciplines. Intersect’s twelve university members collectively contribute approximately 30 per cent of Australia’s university research output and 1.5 per cent of the world’s. Intersect has made a difference,” he said.

In February last year, Dr Gibson told CIO that big data was poised to drive advancements in the highly promising area of cancer genomics. He said researchers were using information from increasingly disparate sources to identify the genetic and external factors that trigger this group of potentially deadly diseases.

Dr Gibson will remain involved with Intersect in a consulting role for strategic projects.