The Aquos 4K Next basically fakes 8K resolution, but will cost over $13,000 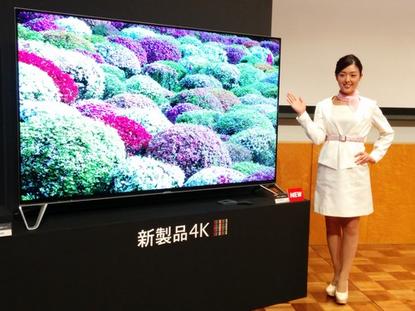 A model shows off Sharp's Aquos 4K Next, which can upscale to 8K resolution, at a press conference May 21, 2015 in Tokyo.

Electronics maker Sharp is launching what it believes is the next phase in high-definition TVs with a 4K screen that can display imagery at 8K resolution, seen as the display standard to follow 4K.

Sharp is calling the technology the world's first 8K upscaling engine, and the TV will cost over ¥1.6 million (US$13,000) when it goes on sale in July.

At a press conference in Tokyo on Thursday, Sharp exhibited the new television alongside a regular 80-inch 4K screen, with both showing beautifully shot scenes of traditional Japanese architecture, handicrafts and cuisine.

While the difference between the two wasn't clear at first glance, a few seconds of looking at the screens showed that the Aquos 4K Next featured super-saturated colors that had more pop.

The screen adds a yellow subpixel to the traditional red, green and blue (RGB) array, producing more vibrant, realistic colors. Sharp has deployed RGBY before in the LCDs used in its Quattron line of HD TVs.

The new Aquos also has a newly developed signal-processing circuit called the X8-Master Engine Pro, which automatically cuts noise and adjusts contrast and color based on the imagery being displayed. Sharp did not reveal more information about the circuit, but said the new TV has much finer diagonal lines than regular 4K screens, which can improve the appearance of detail in fabrics and hair on screen.

Sharp has been pursuing 8K display technology, showing off an 85-inch prototype 8K TV at the Ceatec electronics expo outside Tokyo last October. It was the company's first to meet the BT.2020 standard for 8K resolution and color gamut set by the International Telecommunications Union.

Despite its cutting-edge display technology, however, Sharp has been struggling to earn a profit amid intense competition from display makers.

Last week, it announced a US$1.7 billion bailout from banks, its second lifeline in three years, and posted a dismal earnings performance for the year to March 31 with a net loss of ¥222.3 billion ($1.8 billion). It blamed declining prices in small and medium-sized LCDs and has pinned its hopes on advanced automotive displays, which it sees as a more stable market.

Sharp plans to first make 200 units of the new TV and begin sales July 10 in Japan, and is considering offering it overseas as well.