Chip maker Avago may be close to buying Broadcom

The companies reportedly are in advanced talks 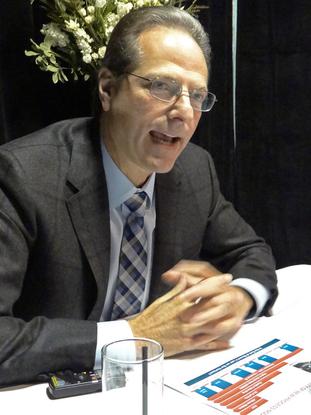 Henry Samueli, co-founder, chairman and CTO of Broadcom, spoke at a press roundtable on Wednesday in San Francisco.

Avago Technologies is in advanced talks to acquire Broadcom in a potential deal that could mark the latest consolidation in the global semiconductor industry, according to a report in the Wall Street Journal.

The terms being discussed aren't clear and the deal could still fall through, according to the report, which did not name its sources.

Broadcom makes chips for a wide range of communications products, including wired and wireless networks, connected home and car equipment and the Internet of Things. Avago's silicon goes into industrial and enterprise storage gear as well as wireline and wireless networks. Avago, founded in 1961, is based in San Jose, California, and Singapore. Broadcom is in Irvine, California, and started in 1991.

Though Broadcom is well known as an aggressive competitor in communications chips, especially as a rival and longtime patent adversary to Qualcomm, Avago has the higher market capitalization, at almost $37 billion. Broadcom weighed in at about $32 billion on Wednesday. Both companies' shares were up significantly in midday trading.

Avago acquired storage and networking company LSI for $6.6 billion in 2013 and later sold LSI's flash storage business to Seagate and its networking arm to Intel.

A buyout would follow two other big chip deals announced in March. NXP Semiconductors and Freescale Semiconductor plan to merge into a $40 billion company with strengths in IoT and cars. In addition, Intel plans to acquire Altera for its custom server chip technology. Meanwhile, hedge fund Jana Partners has taken a large stake in Qualcomm and called on that company to reorganize, according to news reports.