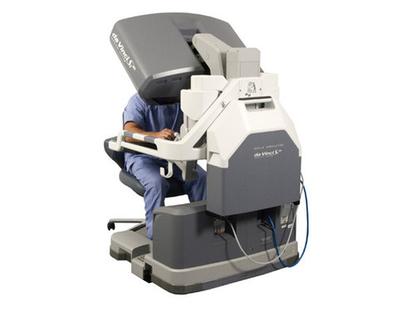 A physician uses a Mimic Simulator to perform a virtual remote robotic surgery.

A Florida hospital has successfully tested lag time created by the Internet for a simulated robotic surgery in Ft. Worth, Texas, more than 1,200 miles away from the surgeon who was at the virtual controls.

Next, the hospital plans to test lag times for remote robotic or "telesurgery" in Denver and then Loma Linda, Calif.

The experiment wasn't performed on live patients, but rather on virtual patients using a machine called "Mimic Simulator." The training hospital was taking a first step in testing Internet lag time between when a surgeon moves a remote robotic instrument and when it reacts.

Physicians watching the virtual telesurgery using laparoscopic instruments on video couldn't even detect a lag time, according to Smith.

The Florida Hospital's simulator mimics procedures performed by a da Vinci robotic surgical system, the most common equipment in use today; it's used for hundreds of thousands of surgeries every year around the world.

Ultimately, the hospital hopes to enable surgeries for remote patients here and abroad who wouldn't otherwise have access to the world's top surgeons.

The Florida Hospital's experiment tested two things: As the distance from the robot increases, how does that effect lag time, and if there's lag time, how much of it can the attending surgeon tolerate?

The problem has less to do with the speed of light at which electrons travel via fiber optics and more to do with Internet provider processing times. A single movement of a robotic arm by a surgeon in a remote location requires bidirectional data-packet transfer: One data packet to control the robot's movement and the other to view the result in real time on a video display.

In real time, the Internet lag had no effect on the surgeon's ability to perform a remote robotic procedure, Smith said.

For example, the lag time between four Orlando campus hospitals measured 5 milliseconds; between Orlando and Tampa, 10 to 150 milliseconds. "There was no difference between that and [robotic] surgery 10 feet away," Smith added.

When the hospital tested lag time between Celebration, Fla. and a partner hospital in Ft. Worth, Texas, the lag time ranged from 30 to 150 milliseconds -- completely undetectable by surgeons.

So what if the Internet goes down?

"These results indicate that modern, well-connected facilities possess the communication bandwidth needed to safely perform telesurgery today," Smith said. "It appears that we have the technology, but we are still waiting for business cases and regulatory permissions to open the door for telesurgery."

A major hurdle to long distance telesurgery is Internet resilience. While a healthy Web connection may enable undetectable lag times, what about when a major news announcement leads to an explosion of bandwidth devouring social media activity?

Or, what happens when a bad actor decides to launch a denial of service attack?

Smith said that to date, the Nicholson Center has been able to compensate for any unforeseen Internet slowdowns or outages by using backup connections. And, if all else fails, the hospitals in which the telesurgeries are being performed will have a surgeon on call if needed. In other words, the patient will need to be in a hospital, at least in the immediate future, so a local surgeon can respond in case of an emergency.

Then, of course, there are major liability questions, such as who do lawyers go after if a telesurgery procedure goes south? Do they go after the hospital performing the procedure, the hospital with the robotic surgery equipment or do they go after AT&T or Verizon because the connection was lost?

But Smith said the benefits could outweigh the risks.

For example, wounded soldiers could be transferred to a nearby facility where a specialist thousands of miles away could provide topflight care.

In fact, the Nicholson Center's current telemedicine tests are being funded by a $4.9 million grant from the U.S. Department of Defense.

Additionally, medical volunteer services, such as Doctors Without Borders, could offer surgery to the rural masses, without the burden of having to fly around the world.

The benefits of robotic surgery

As laparoscopic surgery has gained popularity over the past 30 years, advancements have allowed greater precision with instruments; some laparoscopic procedures are so exact that surgeons can no longer perform them without robotic assistance.

"Robots are also much more reliable. Their arms don't get tired after 30 minutes," Smith said.

Once robotics took over the at the operating table, allowing the surgeon to control instruments from feet or yards away, it also enabled new training facilities that allowed students to stand around a surgeon as he performed a procedure from behind glass in an adjacent room.

Dr. Randy Fagin, chief administrative officer for the Texas Institute for Robotic Surgery, oversees 150 hospitals equipped for robotic surgery. In all, there are more than 2,000 surgical robots in operating rooms across the U.S., Fagin said.

In fact, 80% of prostate cancer surgeries today are performed using surgical robots, as are 41% of hysterectomies, Fagin said.

"So it's become very commonplace," he said.

Because surgical robots are even more dexterous and precise than physicians are able to be, many patients who previously weren't candidates for minimally invasive laparoscopic surgery now are, Fagin said.

"I can't move my hand fractions of a millimeters, but I can move them a couple of millimeters. And the robot can scale that down," Fagin said. "And, that way I have the potential to create a more accurate cut."

Fagin made an analogy to driving a car, where if the operator wanted the vehicle to make a 90-degree turn, he or she would turn the steering wheel 270 degrees; the car's steering system scales the steering wheel movement down to make the turn.

An additional benefit of using robotic surgical instruments is that data from computers controlling the robotics can be collected and analytics applied to discover best practices based on outcomes.

Fagin manages information and performance for robotic surgery programs at more than 80 hospitals in the U.S. using big data analytics from Tableau Software to help manage nearly $1B in resources and revenue.

"It would take an individual hospital 100 years to acquire the same amount of information we collect every year from all our hospitals," he said. "And because of that, we can learn to be better healthcare providers by collecting data rather than anecdotal experiences."

For example, Fagin said, hospitals and even patients often choose surgeons based on their past experience. The more experienced that physician is, the more likely we are to choose them. However, Fagin pointed out, more important than the number of times a surgeon has performed a procedure is the information he or she has learned from those experiences.

"Imagine, whether you're a surgeon, a nurse or a scrub technician, if you were able to empower that person with the knowledge of many," Fagin said. "We can create a collective intelligence...from hundreds of individuals."