The GeForce GTX980 Ti GPU, which will ship on Monday starting at $649, taps into new Windows 10 graphics features 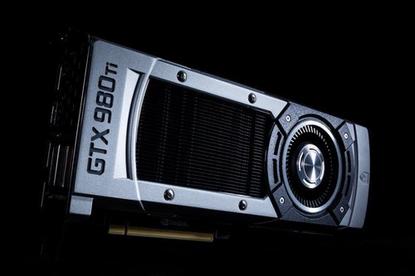 Millions of 4K displays have been sold, and Nvidia believes its new GeForce GTX980 Ti graphics processor will give desktops the muscle to play the growing number of 4K games.

The GTX980 Ti will tap into new graphics features in Microsoft's Windows 10 to play games at 4K, considered the new high-definition standard. The GPU will be able to run popular 4K games like The Witcher and Grand Theft Auto at 45 frames per second, which will provide a decent gaming experience. Videos typically play back at 30 frames per second.

Headsets like Oculus Rift will also get better graphics with the new GPU, and roaming virtual worlds will be more enjoyable, said Tom Peterson, director of technical marketing for Nvidia.

Graphics on high-end headsets typically run at resolutions four times lower than 4K, but need to be rendered at 90 frames per second so users can move in virtual worlds without getting hung up between frames. The GTX980 delivers on this requirement, Peterson said, adding that a lower frame rate can make VR a nauseating experience, and older GPUs can't reach high frames per second.

Moreover, the new GPU does a better job of adjusting 3D VR images to work on headsets, whose stereoscopic lenses display images differently than conventional flat-screen displays. Images are typically compressed at corners to fit within the curved headset lenses, and the GTX980 Ti optimizes pixels in the corners to the highest possible resolution.

The Oculus Rift headset needs to be attached to PCs. Others like Samsung's Gear VR and Google's Cardboard require smartphones to be slotted into headsets, but the images are not as sharp as that of an Oculus Rift.

The GeForce GTX980 Ti is a big upgrade over predecessors like GTX780, which is two years old. The GTX980 Ti, like its predecessor, consumes 250 watts of power, but is around 75 percent faster.

The GPU has 6GB GDDR5 memory so images can be rendered smoothly, while the 780 had just 3GB. The GTX980 Ti is based on the GM200 architecture, better known as the second-generation Maxwell design.

The GTX980 Ti is priced at US$649, and becomes available on Monday. The new GPU can be thought of as a slightly slower version of the Nvidia's flagship GPU, the US$999 Titan X, Peterson said.

The GTX980 Ti will serve as a bridge to new Nvidia graphics chips based on a new architecture called Pascal due next year. Nvidia is expected to implement a host of new features in Pascal GPUs, including stacked memory and support for a new faster interconnect called NVLink. The new features will collectively improve GPU performance significantly.

Nvidia in a see-saw GPU battle with AMD, which at Computex is also expected to release new graphics chips based on its new architecture code-named Fiji. Both companies are focusing on bringing more power efficiency to their chips, with incremental improvements in performance.