An inside look at the Qantas hackathon

CIO's Bonnie Gardiner shares her experience as a judge at the airline's hackathon on the weekend. 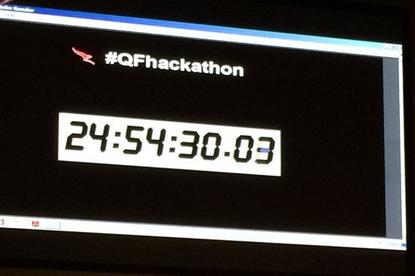 Qantas is set to benefit from a wealth of new ideas generated during its first ever hackathon last weekend. External developers were invited to team up and tackle real business problems specific to the airline, which steered its way back in the black earlier this year following a multi-billion dollar cost cutting drive.

As a judge at this event I saw firsthand the real appetite that exists out there for product and service development, as well as the many interesting ideas and agile creation coming out of the coding community.

It demonstrated that hackathons are a direct route to new entrepreneurial thinking and that corporates would be remiss to ignore the opportunities present in coding competitions and similar initiatives in a time of digital disruption.

Run entirely onsite at the Qantas Centre of Service Excellence in Sydney, the Qantas Codeshare hackathon began Saturday, with venue doors officially opening at 9am. Following welcomes and announcement of the problem sets, coders began work at 1pm and continued until midday on Sunday. Pitches began at 1pm, followed by deliberation from the judges, and subsequent prizes.

From start to finish, the weary and dedicated coders had just 30 hours to contemplate and create new applications or service offerings that would improve the service Qantas provides to its customers. Coders were required to build a working prototype with a core feature that addresses real life problems, and granted a mere five minutes to present their ideas to the judges.

Teams were allowed to leave in the evening or stay to work through the night at the impressive venue, complete with enviable ‘tactile napping stations’ that the author wishes were a regular feature in the office environment, including blow-up mattresses and bean bags available for crashing. Coders also had access to catered meals, and various sugary reinforcements to keep them powering through.

Hackers came in all shapes and sizes, with one particularly young helper looking no more than 10 years old! Needless to say, he was kept well away from the hacker beer fridge. 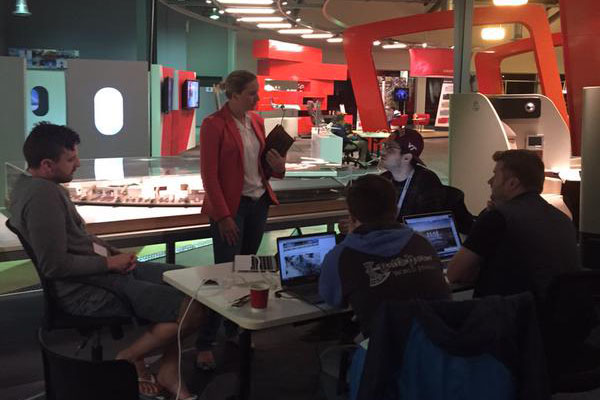 The event was a collaborative effort from Qantas’ digital innovation team, along with the founders of the Disruptor’s Handbook, Gavin Heaton and Joanne Jacobs, both digital advisors and hackathon experts. Last year David Murray, Qantas adviser on digital innovation, approached Heaton after he watched him give a presentation on digital disruption to ask if Qantas could collaborate with him and Jacobs on a hackathon.

Heaton tells me that he and Jacobs have worked extensively with Qantas to deliver an event that understood their particular needs and concerns.

“We call it ‘finding the way to yes’. We take the same approach with the community - we advocate on behalf of the teams as well as Qantas. We are looking for ways of bringing them all together," he said.

“As it turns out, it came together exceptionally well. We are happy, and the feedback from Qantas has been very positive.” 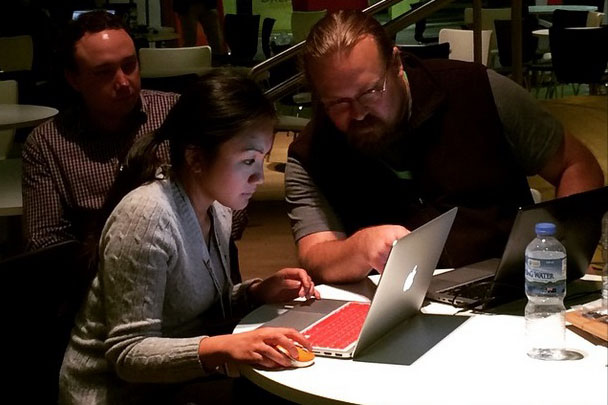 Still hard at work in the wee hours of the morning (Source: Gavin Heaton)

As everyone packed up their computers and scoffed the last of their lunch, we began to shuffle into the auditorium, ready to be wowed by the ideas.

"I do not envy you guys [the judges], this will be a real challenge," Jacobs warns me.

Hackathon winners were to be awarded between $500 and $4000 worth of Qantas travel vouchers, and entrants could also apply to take on a six month digital Qantas cadetship. But first - the pitches!

Judges other than yours truly included Steven Cooper, seasoned hackathon judge and developer advocate for PayPal and Braintree Payments, Frank Arrigo; API evangelist in the Telstra Software Group and co-ordinator of Telstra hackathons; and Jo Boundy, head of digital and entertainment at Qantas.

Presentations from the 11 teams were nothing short of impressive ranging from travel planning apps with built-in APIs from Google, Uber and Hooroo to name a few, as well as gamification tactics, with quizzes and surveys used to increase customer engagement in market research initiatives in exchange for frequent flyer points.

Everyone was also very impressed with the virtual reality application pitch using Google Cardboard to provide travelers with the next best thing to real life experiences when planning their journey.

The teams were judged not only on their level of innovation and creativity but also the likelihood that the ideas could become a reality within Qantas strategy. 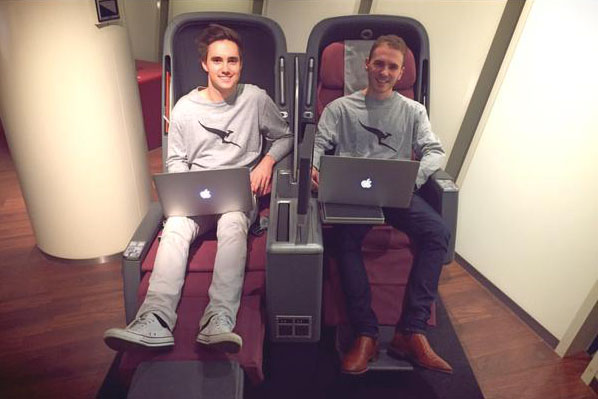 After much deliberation with my fellow judges, the winning team was a group of four from Deloitte Digital who created an on-flight frictionless payment concept for Qantas travelers who wished to upgrade seats, purchase additional items and contribute to carbon reduction in real time.

In second place was a team of academic game developers from Tasmania (Team Tasmania) with clever new aviation-themed game options specifically for the Qantas Joey Club - a relatively new program that benefits children as the fastest growing segment of the Qantas Frequent Flyer membership base.

With so many great ideas, you’d wonder how we managed to pick just three. Well, we didn’t.

Sharing third place were two pitches of equal ingenuity, with Sam Killin, the ‘Lone Wolf’ developer creating ‘Qantas to the Door’, and a duo called ‘Cool Mac’ with the idea for ‘Qantas iQ’.

The former is an opt-in rideshare service for Qantas customers that allows them to access details of other passengers headed to similar destinations, cutting travel costs and encouraging mingling – Uber and Tinder combined! The latter is a sassy natural language botnet service similar to a travel agent Siri (fondly referred to by some judges as ‘Qiri’) to discuss and book flights, cars and accommodation. 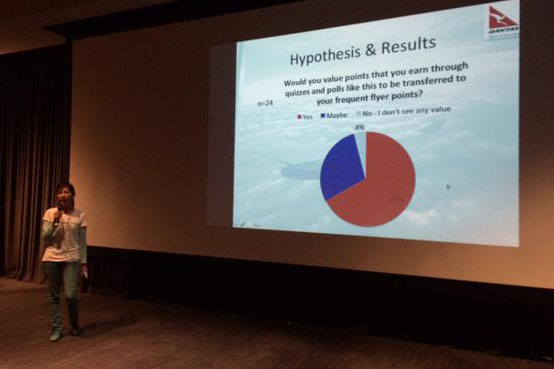 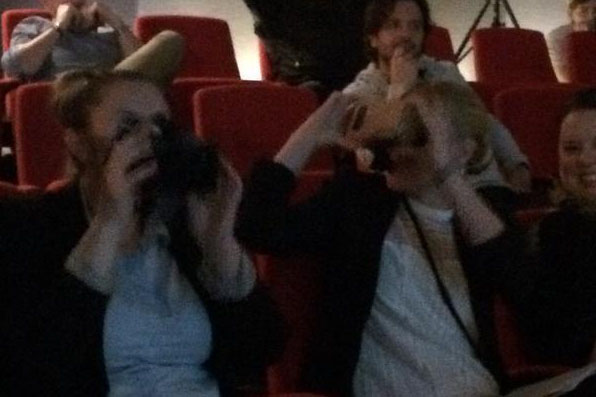 “We are absolutely overwhelmed by all the phenomenal ideas that you guys came up with,” said Boundy before announcing the winning teams.

“I can’t believe that you’ve not only been onsite here for the while weekend - that in itself is an impressive feat – but also, the ideas that were generated in such a short period of time. Extremely creative, extremely innovative, very unique thinking and certainly challenged my thinking. It’s fantastic to see you thinking outside of the box.

“We know at Qantas that we don’t have a monopoly on good ideas, and you guys have proved that by coming in here and challenging our thinking, so personally from me and on behalf of all of Qantas, a massive thank you, it’s been awesome.”

The victors, made up of Bradley Clayton, Hadi Michael, Jake Doherty and Lachlan McDonald, said that they entered for the thrill of the challenge, but winning was an added bonus.

“We came to have fun and we absolutely had a tonne of fun,” says Clayton. “We loved the venue and everything they set up, we loved the challenges, and getting our teeth sunk into a real world problem, and I guess winning was a bonus. Even if we didn’t win we’d have still walked away with a great experience.” 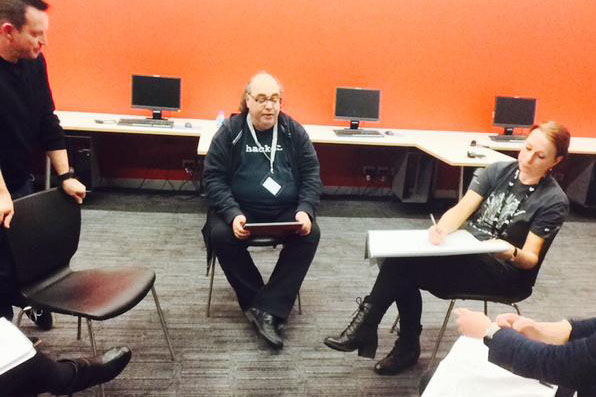 ‘An appetite for creativity’

After announcing the prize winners and the hackathon draws to a close, Boundy reiterates to me how overwhelmed she is with the solutions presented, which would no doubt take a lot longer to produce in a larger corporate like Qantas.

“There are a couple of ideas that I could definitely see becoming a reality, I’d pick up the phone to discuss it with them.”

“We have dedicated innovation teams inside Qantas, but often you can get really focused on the things that you know, so the point of doing a hackathon was throwing it out there for these men and women who have very little experience with innovation immersing themselves in some fairly simple and contained problems, and then applying their creativity and experience as a traveler."

Given the success that this weekend was, Boundy says Qantas will definitely be looking to do more hackathons in the future, with whole new problem sets, or on specific parts of the business.

“It’s certainly a great way of thinking differently – you’ve got to be the right organisation … I feel like most consumer-facing organisations that are keen to innovate and keen to think differently should certainly consider his kind of creative thinking.” 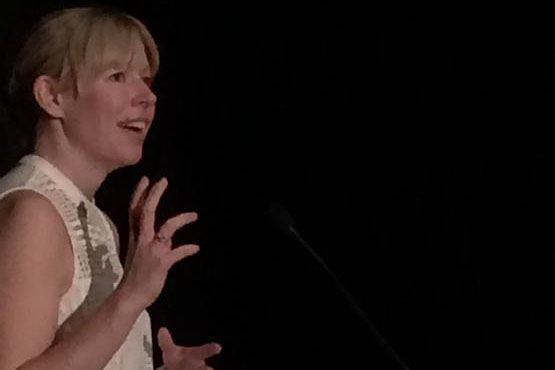 I find out the hackathon sold out in just 10 minutes, with a hefty wait list of people trying to get in, not to mention successful applicants gave up their whole weekend to take part. This surely demonstrates a large appetite for creative digital thinking in Australia, which creates hope amid doubts that we will have the skills to drive innovation now and into the future.

“I know there’s a bit of a lag in people signing up to science and IT at the moment, but a lot of these guys have come through different angles to be here, whether it’s been creative design, project management, or comms and marketing,” says Boundy.

“While they might not be following such a traditional IT path they’re still learning these skills, and I think technology is so prevalent now that in this day and age anyone could have these skills, it’s not actually just a niche skillset.”

It’s no surprise that Qantas took the hackathon concept by the horns considering its staunch focus on innovation these past years, with CEO Alan Joyce discussing the benefits of working with agile external suppliers and developers in a LinkedIn post last year.

“Aviation has always grown and evolved through innovation. The difference today is that speed is of the essence,” Joyce writes. “Airlines slow to adjust will fall behind. Those move quickly and show the courage to adapt new ideas have an opportunity to shape the industry.

Hackathons also make up part of Heaton and Jacobs’ innovation toolkit handbook, and they consider them an exciting learning experience for business leaders.

“When you only look within the walls of your company, you will get mostly the same answers that you've been getting to the same challenges. Taking an ‘outside-in’ approach means that you bring a new frame of reference into the equation,” says Heaton.

“It helps us all get a bigger sense of issues, opportunities and what can be done about them.

“Also, there is a perception in the Australian corporate community particularly, that emergent technologies should be treated with suspicion or even as a threat. The reality is that these technologies can help a business thrive.” 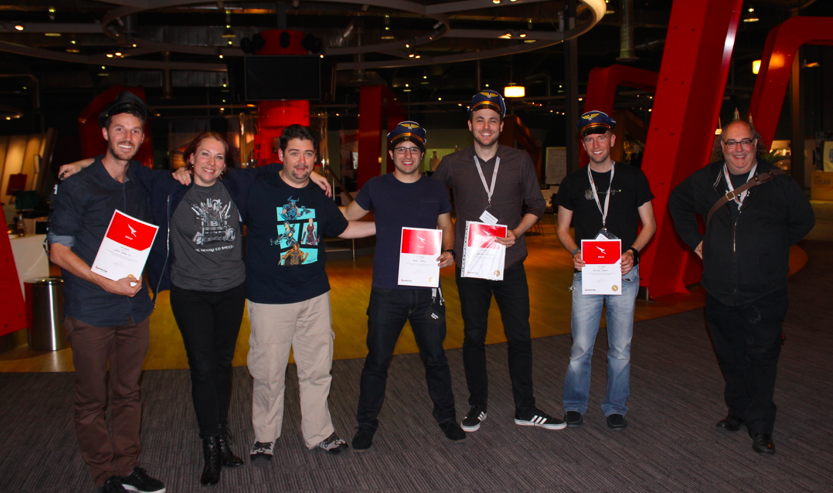 Judging the Qantas Codeshare hackathon was a unique experience that merged corporate and casual, hard work and great fun, the way innovative processes should be.

The business value Qantas is likely to garner from the event, along with the opportunities and 'street cred' for its participants, particularly the winning teams, proves that to further innovative efforts in Australia, businesses need to turn to our thriving developer community. They also need to embrace local startups and entrepreneurs and recognise that the best ideas are not just IT-based, but a collaborative effort.