Broadcom, Marvell and Qualcomm are working on new chipsets 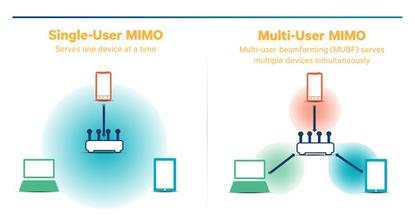 Chipsets that power equipment capable of smoothly moving 4K video streams inside homes over wireless and wired networks were on display at the Computex trade show.

As more devices become connected in homes, home networks have to keep up, and that's where the new products shown in Taipei this week by chip vendors such as Broadcom, Marvell and Qualcomm come in.

They use more spectrum and up to four simultaneous data streams to lay the groundwork for increased speeds. The amount of spectrum has been doubled to 160MHz of contiguous spectrum or 80MHz each in two separate bands, while networking technology MU-MIMO makes it possible to send data to multiple users or devices at the same time.

Broadcom said its chipset has 5.4Gbps of total Wi-Fi data capacity and Qualcomm said its chipset's peak speed to one device is 1.7Gbps. That sounds impressive, but any wireless speed quoted by a vendor should be taken with a grain of salt; tests will have to show what the products based on the chipsets are capable of in real world scenarios.

Neither company said when it expects the first products to arrive. However, the chipsets have been made available to partners in small volumes, or samples, which means products are on the way.

The first devices to support MU-MIMO thanks to Qualcomm were Xiaomi's Mi Note and Mi 4i smartphones, and Acer's Aspire E series laptops. Dozens of manufacturers are expected to launch MU-MIMO products, Qualcomm said without providing more details.

Qualcomm also announced a new reference design, the REH152, that combines powerline technology and 802.11ac. It too supports two data streams. The aim is to help reach rooms far from the home's wireless router, or in cases where dense building materials have created areas with weak or no coverage, Qualcomm said. Products based on the reference design will create a wireless hotspot anywhere they're plugged in. In this case, reference designs make it easier for networking vendors to develop products.

Faster wireless networks are driving the need for faster Ethernet switches, according to Broadcom. So the company previewed the BCM53134, a low-power Gigabit Ethernet switch for home gateways, small business switch systems and wireless router applications. It can handle traffic from multiple Gigabit Ethernet ports and eight classes of service per port to ensure important applications get enough bandwidth on the home networks irrespective of the total load.

Marvell also want a piece of the switch market. It showed multiple chipsets, including the Link Street SOHO 88E6390X, a single chip product with 8 Gigabit Ethernet ports and two 10 Gigabit Ethernet ports. That's a little extreme for home networks, but the capacity may be necessary for people who want to stream content over the Internet and from their own servers.

Some of these speeds and features may seem like overkill today, but home networks aren't typically upgraded annually, so people need to have a multi-year outlook when buying new equipment.