Expectations for usage of 'one-stop-shop' portals have not been met, says Glenn Archer 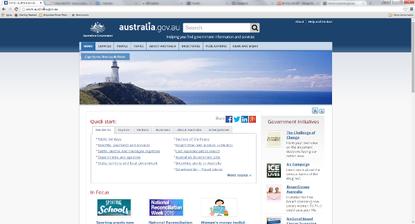 Government portals have been used for decades to provide information to citizens, as well as simplify and consolidate online services, but there’s no denying that there has been mixed success over the years.

Good portals, however, drive service improvement and value, and represent an ideal transition platform to digital government. We have seen an obvious change in the application of portals in recent years.

The vision of a single ‘one-stop-shop’ website providing citizens with access to government services over the past decade has proven to be far more difficult than first anticipated and in many cases, the expectations for portal usage have not been achieved.

Based on research and discussions with clients, there appears to be two primary causes behind the poor outcomes for many government portals. The first is a failure to simplify policy, processes and roles of agencies that underpin the advice provided and transactions offered on the portal.

This is a fundamental part of designing services offered on the portal to be citizen-centric, well integrated and crafted to make best use of the channel.

Choosing the wrong approach to the online credential that must be used to authenticate with the portal is the second issue. If it is difficult for citizens to obtain, use or just different from credentials used by other government agencies or jurisdictions, it will act as a disincentive to make initial and/or ongoing use of the portal.

These two issues — more than any others — have led to poor adoption of portal services. This has resulted in many governments scaling back on the original vision, disaggregating the portal and/or moving to single-purpose sites. The precise model chosen and features supported by these portals now vary substantially across jurisdictions.

Most federal and many state governments, however, are continuing to invest in portals – based on the demand for better and more consistent services delivered online.

Projects established to support these are typically high profile and well resourced. Given the observations above, government CIOs need to maximise the outcome and benefit derived from these investments. They should also look to leverage them as a platform to support future digital government services.

Local government portals are typically less complex than those in other tiers, reflecting the fact that the range of services is narrower or more immediate in nature.

Usually they also benefit from being focused on supporting services for a smaller number of agencies that, given the scale, are more familiar with the need to work cooperatively together. Nevertheless, local government CIOs have an opportunity to learn from the challenges and successes of CIOs in other tiers.

Support for a whole-of-government portal

It is critical that governments don’t view portals as a panacea, as they will never replace the need for better program and policy design, and can only partially overcome complexity in administration.

No one model is right for all federal, state or local governments. But it may be possible to learn from those deployments that have been partially or substantially successful.

A core tenet of digital government is that services are designed to take advantage of data in optimising, transforming and creating completely new business models and government services. A whole-of-government portal provides arguably the most valuable pathway to achieving this aim.

For this type of portal to succeed it must, by definition, take a whole-of-government approach. This requires engaged senior leadership, strong central governance and greater controls on investment to facilitate a more consistent approach to the design of services around the citizen.

It also needs to explicitly hide the complexities of individual agency responsibilities — especially when transactions need to cross organisational boundaries.

Unfortunately, individual agencies and policy owners are often unwilling to concede responsibility and control to another agency, regardless of the larger benefits that might be achieved.

However, there is compelling evidence that establishing an appropriate governance arrangement is the single most important factor in driving service transformation. To address the issue of ownerships and loss of control, CIOs should ensure that these governance arrangements are inclusive and supportive of innovation.

Choosing a model with current context and future direction

We are witnessing the evolution of the government citizen portal. Over the past decade, departments and agencies have found it necessary to invest, often multiple times, to overcome shortcomings in their original portal design and underpinning business model. This has been an expensive and at times, embarrassing learning experience.

Despite this, some are consciously building on their success and positioning their whole-of-government portal as a platform to support their transition from e-government to digital government. CIOs have a critical role in helping governments to maximise the potential for the portal to succeed.

The australia.gov.au site is a great example of the evolution of a whole-of-government portal and the varying roles that credentials have played over the past decade.

Launched in 2002 to replace fed.gov.au, australia.gov.au underwent a major upgrade in 2010. Much of the functionality, including the online credential, was transferred to the new my.Gov.au site in 2013, which is managed by the Department of Human Services.

Today, the australia.gov.au site is primarily an information/referral site and my.Gov.au is a hybrid portal – allowing a range of other government agencies to leverage its credential to obtain access to their services.

CIOs need to understand that all portals will evolve in due course. Predicting the path that any particular portal evolution might take can be difficult. The challenge is to maximise the value during each iteration and minimise the effort to support the transition to the next phase.

A good online credential is necessary, but not sufficient to ensure portal success. It won’t guarantee success, but a poor one will ensure failure. If it is complex for citizens to obtain, difficult to use or not interoperable, it will seriously undermine adoption. Unfortunately, this relationship is perhaps not well understood or appreciated at times.

In general, portals with poorly considered credential arrangements are subject to higher than normal failure rates. They typically struggle to gain traction with target audiences and are often established by entities with limited experience in delivering online services.

The experiences of the personally controlled e-health record (PCEHR) in Australia provides insight into the important role that obtaining a credential can play in terms of usage and adoption of program specific portals.

Based on a review of this initiative issued by the Australian Government in December 2013, it’s clear that this challenge was not well understood or appreciated by the project team.

As a consequence, this initiative is now substantially behind its original schedule and has resulted in the need for government to make a much greater investment than originally anticipated. PCEHR is now leveraging the hybrid portal my.Gov.au, and the government has decided to move from an opt-in to an opt-out model to drive adoption.

The key learning from this, and other similar initiatives, is that failing to consider the technical issues sufficiently, together with the actual and perceived benefits from the citizen’s perspective, can fundamentally compromise high-profile government initiatives.

As more and more government services move online, it is critical for departments and agencies to deliver well executed portals as they transition to digital government, particularly as citizens become increasingly tech savvy and expect superior service delivery.

Portals are already supporting the increased deployment of mobile-based services and transactions through shared technical platforms. The next stage of this evolution will likely see increasing integration with devices and data underpinned by the Internet of Things.