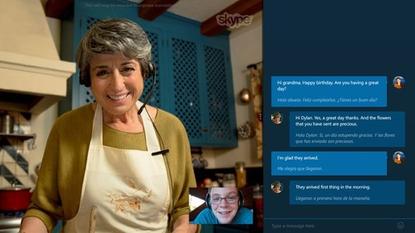 During a Translator call, Microsoft advises you to use a headset with a microphone instead of a stand-alone mic. You should also use a wired connection rather than Wi-Fi. Translated calls also take longer to connect than a typical Skype call. You can find a complete list of Translator tips on Skype's site.

The Skype Translator beta app now can help people say "guten tag" to their friends in Germany, thanks to an update it received on Thursday.

For example, someone who speaks English can call up another Skype Translator user who speaks German, and each will have their side of the conversation translated into the other's native language in real time. The app will provide both a computerized voice translation and a running text transcript that allows users to read what's being said.

All of that comes in addition to Skype Translator's existing support for live translation of instant messages sent in 50 different languages, including Arabic, Catalan, Japanese, Polish and even Klingon.

German support has been a long time coming. Microsoft CEO Satya Nadella demonstrated the app at the Code Conference in 2014 by showing off a conversation that took place between two company employees in German and English. The app was first launched in a closed beta program in late 2014.

Skype Translator has been widely available to the public as an open beta on Windows 8.1 since May. It's a project that shows off Microsoft's new strategy under Nadella of quickly moving innovations out of its internal Research division and into products that can be used by consumers.