What does the future hold for Microsoft Dynamics?

Microsoft Dynamics software is moving to be a service you can build into the tools you need to make your businesses processes work better. 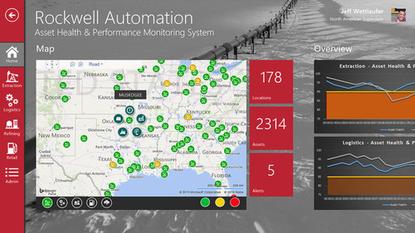 Dynamics customers often use a range of other Microsoft services and building custom apps is becoming an important part of that.

Alongside the news that the Microsoft teams that make devices like Surface and Surface Hub will now be in the same division that makes the operating system on which they run, Microsoft's latest reorg moves Dynamics to the Cloud & Enterprise group (Microsoft Dynamics is the company's line of ERP and CRM applications). That shifts it from the Applications & Services division that builds productivity products and cloud services like Office 365, and puts it alongside Azure, SQL Server, Intune, Power BI, Visual Studio and BizTalk.

The departure of Kirill Tatarinov, who'd been in charge of Dynamics since 2007, and the fact that it's taken a number of years since Microsoft acquired the component parts of the product line for it to become a $2 billion business, might suggest that Dynamics is in trouble (and there have certainly been continued rumors about Microsoft's interest in buying Salesforce.com). But if you look at the future plans Microsoft announced for Dynamics at its Convergence conference this past March, as well as what's happened to BizTalk in recent years, the future for Dynamics looks much more interesting than just being another ERP and CRM tool.

[Related: Elop out as Nadella shakes up Microsoft's executive team]

If you're using Dynamics in your business, you don't need to worry about switching to a different vendor. But you'll probably want to start thinking about how you're going to take advantage of the new approach.

A Microsoft spokesperson called the changes "a natural and logical step in the evolution and progress of the Dynamics business" and confirmed that the senior engineering teams for ERP and CRM are moving to the Cloud & Enterprise group without any downsizing or layoffs.

In many ways, Cloud & Enterprise is actually a more natural home for Dynamics, because the value of what Microsoft wants to deliver is less a commodity IT system like email or document storage, and more a strategic tool for managing the way your business works. Microsoft CEO Satya Nadella referred to these as "systems of intelligence" at Microsoft's Convergence 2015 conference earlier this year, talking about "the reinvention of productivity and business process" together, because improving productivity is so deeply linked to improving both business applications and business processes. That's much more than simply moving to the cloud for agility or cost savings.

"This latest move with Dynamics is in line with the trend for CIOs to focus on business transformation rather than just be a supplier of IT," says Frank Scavo, president of Strativa, a management consulting firm that tracks Dynamics.

"For customers, all of these technologies are interrelated. You never know what combination of products a customer would want or need for a given application. So having them all be part of one mainstream Microsoft development organization makes good sense."

Many key new features for Dynamics are built on Azure services. For example, the Meeting Sense tool Microsoft previewed at Convergence which aims to analyze the interactions you've had with people you're going to meet and show you pertinent information about them is built on top of Azure Machine Learning.

Then there's Azure IoT, a service that makes a lot of sense when you think about putting RFID tags on all the parts in your warehouse so you can track them in your ERP system, and other ways you can instrument your business with sensors.

Predictive analytics bring those two things together, warning you when your expensive machinery needs maintenance before it breaks down.

Increasingly, companies using Dynamics are also building their own apps to deliver CRM and ERP inside the business, which might also build on Azure Machine Learning. Dynamics customer JJ Food Service, for example, built a predictive shopping cart that suggests what you're most likely to want to include in your order.

That doesn't just mean that it's key for Visual Studio to make it easy to create apps that take advantage of Dynamics; it's also an opportunity to make Dynamics one of the services that's available in Microsoft's new development tools like Azure App Services.

Launched in April this year, App Services brings together a wide range of Microsoft services in an easy to use interface for building mobile and Web apps, as well as "logic apps" that make it easy to combine APIs and services into business processes and workflows. You can connect that to your own systems like SQL Server using Azure BizTalk Services. What used to be an EDI and application integration tool that connected your different servers and systems has become a hybrid integration service, giving you a simple way to build business-grade workflow into apps, combining cloud services and APIs with information that lives inside your firewall.

That's a scenario Dynamics fits perfectly into and it also matches the trend that Salesforce.com has seen, where over half of the transactions on the Salesforce.com platform now go through its APIs, rather than being done by users logging onto the web site. Instead of thinking about Dynamics as a standard ERP or CRM system that you install or run in the cloud, it could become much more of a service that you use to build custom business systems that give your company new ways of working.

Scavo argues that this is the direction Microsoft was already highlighting for Dynamics at Convergence, which has shifted from being an event purely covering Dynamics to one where Microsoft showcases its range of business solutions. "For example, there was a presentation by Ford on its connected car initiative using Azure. Ford is a Dynamics customer, but that's only a small part of how it's leveraging Microsoft technologies. Likewise, WASH Multifamily Laundry Systems is a Dynamics CRM and GP customer, but it shared about its use of other Microsoft products, including Azure and Machine Learning, to analyze data from its field locations. Microsoft is one of the few vendors that can bring such a wide variety of technologies to business customers, but having Dynamics as a self-contained business unit really didn't promote those synergies. The new organizational model is much better aligned to the One Microsoft strategy."

Speaking earlier this year, Tatarinov repeatedly emphasized the importance of both the development and business process support in Dynamics. "API-driven connectors are obviously very important for business processes, but it's really more a technical nuance of how connected, end-to-end business process needs to be implemented," he said. "It's an imperative for successful business to ensure that different roles are united through technology and through business processes"

He noted that Microsoft's traditional role as a supplier to IT and its recent success in business applications means that "we often find ourselves as the uniting force in organizations." When talking about Dynamics with customers, he would usually be meeting both technical and business teams, with "more progressive" companies having the two far more integrated. "The CIO becomes the chief digital officer, the CIO is much more connected to the business, the CIO is much more of a participant in business transformation within in the organization, and in those organizations where that happens, magic happens."

Scavo points out that the Cloud & Enterprise group will benefit significantly from being able to have conversations at those levels. "Much of the real innovation in business technology is taking place outside of the IT department, which is Microsoft's traditional customer. The Dynamics applications are the one area that's in regular conversations with business leaders, in addition to the IT folks. So Dynamics brings strategic customer relationships to the table for the Cloud & Enterprise team."