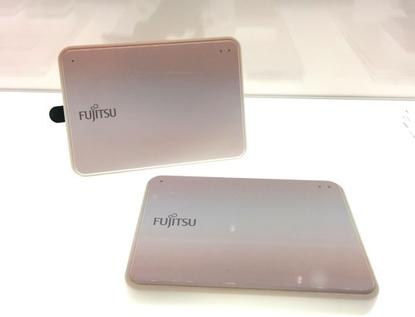 A prototype non-contact motion sensor from Fujitsu seen at a technology expo in Tokyo May 12, 2015. The electronics maker is partnering with Panasonic to test motion sensors and cloud-connected air conditioners in a seniors' home in Osaka, Japan.

In another sign of the living spaces of elderly Japanese going hi-tech, seniors in Osaka are undergoing an Internet of Things (IoT) experiment involving cloud-connected air conditioners and motion sensors.

The electronics giants are starting the test with an eye to launching similar in-home services in their fiscal year beginning April 1, 2016.

The trial comes as Japan struggles with a rapidly aging population, over 30 percent of which will be 65 or older in 10 years, as well as a shortage of workers who can care for the elderly.

The wall-mounted air conditioners, which are already on the market, can gather temperature and humidity information and upload it to the Panasonic cloud. Mounted alongside them, the Fujitsu Laboratories sensor uses microwave radar to detect body movements within a range of 3 meters.

The data is uploaded to the Fujitsu cloud. Analysis in the cloud can determine if the resident is in or out of the room and either awake or asleep. The results are then sent to the Panasonic cloud, which can send notifications to on-site caregivers, who can also adjust the air conditioner settings. The system could help prevent heatstroke and alert nurses to poor quality sleep.

"The purpose of this field test is to provide a safe and secure living space that considers the residents' privacy, and to test how much this can reduce the work load of nursing staff," a Fujitsu spokesman said.

Japanese engineers are also developing robots that assist in nursing care such as the teddy bear-like Robear as well as Internet-connected walkers and smartphone-controlled wheelchairs to cope with the increasing numbers of elderly.