The Upload: Your tech news briefing for Friday, June 26

Self-driving cars face off on California road... Satya Nadella has a new mission (statement)... Uber protests get real in France 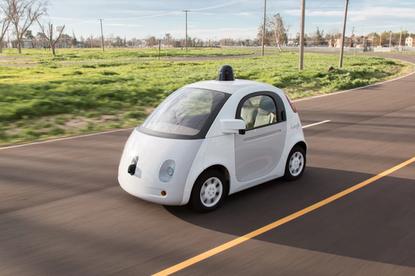 A prototype model of Google's self-driving car, ready to hit the road in 2015.

Self-driving cars face off when Google's cuts off Delphi's

With developers of autonomous vehicle technology releasing their projects into the wild, it was perhaps inevitable that two self-driving cars would eventually meet on the road. Google's certainly seems to be programmed for assertive behavior: According to the director of Delphi Labs, one of Google's self-driving Lexus RX test vehicles cut off Delphi's test car on a street in Mountain View, California. Apparently the Delphi vehicle did as your parents advised and drove defensively, preventing a collision.

Microsoft CEO Satya Nadella has a pithy new mission statement for the company, which he sent out in an email Thursday to all employees. "Our mission is to empower every person and every organization on the planet to achieve more," he wrote. At least one of the company's customers is nostalgic for the days when the company simply wanted to "delight" us. Nadella's email also signaled the possibility of some more change at the company, saying it will have to "make some tough choices in areas where things are not working."

French taxi drivers who want the UberPop service shut down as illegal competition blockaded roads to two Paris airports on Thursday and prompted the Interior Minister to call for a clampdown on the Uber ride-hailing service, Reuters reported. Cabbies also set up roadblocks around Marseilles and Aix-en-Provence and blocked access to train stations there. The UberPop app violates a law established last October, but the company is contesting it and has said it considers parts of it unconstitutional.

Amazon's Alexa voice assistant might get a little more popular thanks to two initiatives just launched that should take it beyond the Echo interactive speaker. A free software development kit can be used to let any Internet-connected product support Alexa voice commands, PC World reports. And Amazon is also putting out a version of Alexa for third-party hardware such as TVs, audio systems, alarm clocks, and cars.

The outspoken CEO of Foxconn, the Chinese manufacturer that builds products for a host of major tech companies including Apple, is tired of being the poster child for worker exploitation. At his annual shareholder meeting in Taipei on Thursday, Terry Gou let loose his outrage over the complaints and insisted that workers "very much love to work at this company," and that "my factories compare better to other factories in the world." Gou also backpedaled on a statement earlier this year that he expected robots to do 70 percent of his company's assembly line work in three years, and said that more likely they would be doing 30 percent of the work in five years.

Engineers in Japan are making conductive inks that can be stretched to the extreme: they printed electrodes and wires on a prototype wristband made of stretchable sportswear textile. The device can act as a muscle sensor, but the technology could also be used for applications such as garments that monitor heart rate or other vital signs during athletic competitions.

Finnish company Uros has launched an LTE version of its wireless hotspot that can be equipped with 10 SIM cards to make roaming overseas a piece of cake. The Goodspeed 4G hotspot can switch automatically between SIM cards, making it easy for users to stay connected as they cross borders.

Apple co-founder Steve Wozniak doesn't sound too worried about a brave new world run by robot overlords, at least not according to a Guardian report that has him speculating that humans will be pampered pets in the new order. He also thinks that it will be hundreds of years before artificial intelligence can run the show, but that AI will know it has to preserve nature and seek to help humans as part of that.

In The Wrap this week, Taylor Swift takes on Apple and wins, electric airplanes take off but Polish airliners are grounded by a hack.

Gmail's new "undo send" feature may be the answer to many a hot-fingered typist's prayers. John Brandon has a theory about why it took six years to bring it out of beta and to a waiting world.