SanDisk today announced the latest of its wireless flash sticks that allow users to access photos, videos and files over Wi-Fi. 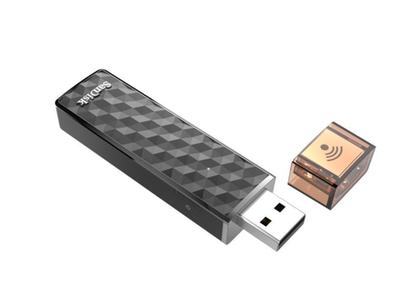 SanDisk's first Wireless Stick, the Connect Wireless Flash Drive, was released two years ago, came in 16GB and 32GB capacities and was priced at $49.99 and $59.99, respectively.

As its predecessor did, the new wireless thumb drive also uses a USB 2.0 (480Mbps) connection to upload content before being able to stream it over Wi-Fi. SanDisk claims the Connect Wireless Stick has enough bandwidth to stream high-definition movies and music to up to three devices at the same time.

The drive is capable of supporting a single video stream for up to 4.5 hours on a single charge, SanDisk said.

The new flash drive is controlled via the SanDisk Connect app, which is free and downloadable from SanDisk's or or Amazon.com's website.

The Connect Wireless Stick is compatible with iPad, iPhone, Kindle Fire, Android devices, Windows PCs and Apple computers. It works with iOS version 8.0 or higher, Android 4.2 or higher, Windows Vista/7/8, Mac OS 10.6 or higher, and via web browser for other Wi-Fi enabled devices, according to SanDisk.