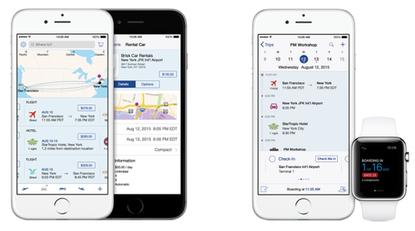 IBM and Apple are working together on building mobile enterprise apps, including one called Travel Track. This app, announced in July, lets business travelers review trip itineraries on their iPhone and Apple Watch.

Apple shared details on its efforts to make inroads into the enterprise space via its IBM partnership on Tuesday.

Maestri didn't provide information on how many workers are using the apps. For example, only a few Air Canada flight attendants could be using the Passenger + app, which allows them to view passenger and flight information via an iPad. Apple and IBM didn't immediately respond to requests for more information.

Maestri noted that governments are curious about using Apple hardware and IBM software to care for their aging populations as a result of publicity for a project the companies are involved with in Japan. The country's government will provide senior citizens with an iPad equipped with special health apps developed by IBM. By 2020, between 4 million and 5 million Japanese seniors could be using the tablets.

Other organizations using IBM apps on Apple mobile devices include clothing retailer American Eagle Outfitters and the government of Miami Dade County in Florida, which were two of the earliest customers.

Last July, Apple and IBM said they would work together to develop mobile apps for business users. Under the deal, IBM will also sell and support Apple hardware.

So far, the partnership has yielded 35 apps, Maestri said, with 13 of those coming in the most recent quarter. Some of the apps released during that time include software for human resources, health care and retail banking, he said. Apple is still on track to release 100 apps by the end this year, a goal set by Apple CEO Tim Cook when he first discussed the IBM deal last July.

Cook has said the IBM partnership is a way to revive stagnant iPad sales.

Fred O'Connor writes about IT careers and health IT for The IDG News Service. Follow Fred on Twitter at @fredjoconnor. Fred's e-mail address is fred_o'connor@idg.com