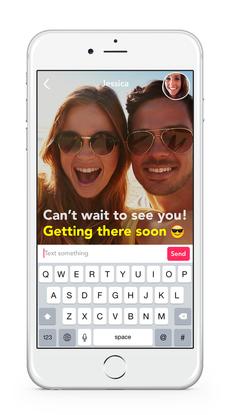 The app, called Livetext, is video calling with a twist: there's no audio. To communicate, users type texts and emojis that are overlaid onto the screen during the call.

The app's format might sound restricting, but Yahoo says Livetext will help people to communicate more freely. The lack of audio, the company says, removes inhibitions that people might feel when they otherwise receive video calls in public.

"We wanted to bridge the gap between the simplicity and ease of texting, with the live feeling of calling," said Adam Cahan, senior VP of video, design and emerging products at Yahoo, during the app's unveiling at an event in New York on Wednesday that was webcast.

Livetext was developed from scratch at Yahoo. But its development was aided by Yahoo's acquisition last year of mobile messaging app MessageMe, the company said Wednesday. It's yet another messaging app in a sea of competitors like Snapchat, WhatsApp and Facebook Messenger.

Still, Livetext is the latest attempt by Yahoo to provide a messaging app that resonates with users. It will become available to download for free on Thursday for iOS and Android, in the U.S., U.K, Canada, Ireland, Germany, France, Hong Kong and Taiwan. Users will be able to text in English, French, German and Chinese using the app.

The app streams video only when two people are connected through the app at the same time. Users can search for friends in the app through their Livetext user name, or through the contacts list on their phone.

There is no time limit on calls placed through the app, and no way to save or archive the sessions. The video quality will depend on the strength of the data connection, although connections at 3G and above should suffice, Yahoo said.

Yahoo's existing Messenger app also provides messaging and video calling functions. It's currently available on Android and the desktop, but not on iOS.