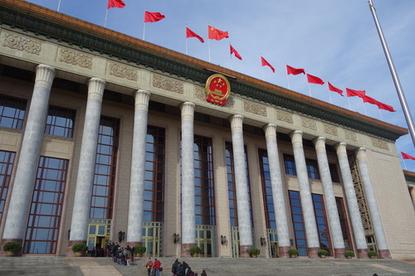 China's Great Hall of the People.

China's control over the Internet is set to expand. In a bid to better police local websites, the country's security forces are establishing offices at the biggest online firms in the country.

The country's Ministry of Public Security announced the new measures at a time when authorities have been increasingly concerned also about cyberthreats.

Websites based in China already have to abide by strict provisions for online censorship, and will often delete any content deemed offensive by government censors.

The ministry's plan, however, will place China's security forces at the offices of the country's major websites, so that they can quickly respond to suspected online crimes, it said in a statement.

"Cyber attacks, the online spread of terrorist information, Internet fraud, and the stealing of personal information," were among the biggest threats the ministry named. In addition, authorities want to crack down on online rumor mongering, pornography, gambling and drug-related Internet activities.

No specific companies were mentioned, but the country's biggest Internet firms include Alibaba Group, Baidu and Tencent.

The announcement by the ministry comes at a time when the government is considering a new "Internet security law" that could increase China's online censorship while addressing China's online security concerns.

The draft legislation calls for the vetting of Internet products used in critical networking infrastructure, registration of Internet users by their real names, and greater online surveillance.

China has made cybersecurity a major focus, following leaks from former U.S. National Security Agency contractor Edward Snowden that alleged that the U.S. has been secretly spying on the country. But the New York-based Human Rights Watch is concerned that the security legislation will stifle free speech.

"The law will effectively put China's Internet companies, and hundreds of millions of Internet users, under greater state control," the group said in an email.

The public comment period for the draft bill ends on Wednesday. In July, China passed another security law that also gives the government control over the country's Internet infrastructure.

Although China's online censorship has grown over the years, the Internet here can still cause controversy. Last month, a video of two shoppers at a Uniqlo store in Beijing engaging in sex went viral, through the help of local Internet services.

In response, a government regulator condemned the video, and held meetings with two Chinese Internet firms, Sina and Tencent, demanding they better manage their content.