The Cloud gets mobile apps moving 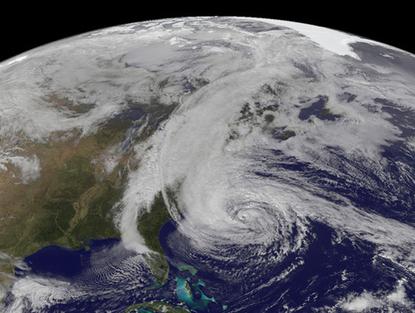 Lessons from 9/11 helped New York and New Jersey’s financial industry prepare well for the brunt of Hurricane Sandy, as distributed data centers, generators and hardened networks enabled businesses – including major Internet hubs -- to carry on for the most part. Not to say that there also weren’t plenty of flooded data centers and ruined equipment. Cell phone networks stood up better than they did during last year’s storms, and carriers supplemented coverage with charging stations for those without power. Fuel availability proved to be one issue, as Verizon and others were challenged to find the gas needed to power generators and fuel up service vehicles. Scammers naturally jumped into the Hurricane fray, too, looking to plunder those vulnerable to their online tricks.

Immediately after Hurricane Sandy tore through New York City in October 2012, city officials needed a quick way to show the damage that had been done to streets and infrastructure.

They needed an app - and they needed it immediately.

For a quick turnaround, Cordell Schachter, chief technology officer at New York City's Department of Transportation, asked his crew to stop work being done on what was eventually to be a street excavation permit app and had programmers repurpose it to show street damage instead.

And because they were doing their app dev on the cloud, they were able to get the application quickly built, tested and in use on the city's storm-damaged streets, according to Schachter, who said using the cloud was "much faster" than traditional app-dev methods.

"We had sand and water in the roads, damaged street signs," he told Computerworld. "We had inspectors all over the city taking pictures with their iPads. And when the commissioner, who had to justify why we needed restoration money, had to show pictures of damage to state and federal officials, he could call it up on his iPad. We needed to be mobile."

Schachter said he had known before Hurricane Sandy hit that they needed the cloud, but the storm and the ensuing need for quick and efficient application development drove that home.

Why cloud development works for mobile

New York is in good company. Mobile apps have become increasingly dependent on the cloud, with data storage and processing happening inside the cloud, instead of on a mobile device or on an enterprise's own server banks.

The cloud also can handle peak app traffic, meaning enterprises aren't burdened by crushing loads or by paying the costs of unused servers when traffic is slow.

Mobile being married to the cloud is nothing new. Think Gmail, Google Maps and likely your favorite navigation apps. They've long been cloud-based.

Now, though, there's an increasing push behind enterprises using the cloud to accelerate and ease mobile app development.

Application development tools that are native to the cloud can give users and enterprises faster app delivery, better performance and more stable uptime.

Developers, often being pushed to work at breakneck speeds on new apps, can set up and launch their own development and test environments without going begging up the IT hierarchy.

Developers no longer have to wait for new servers to be provisioned and they don't need to spin up a bunch of servers to test their apps.

Creating insurance apps in the cloud

"With a few commands, you have a server up and running. You work on the app and then launch it," said Mackenzie Kosut, head of technical operations with Oscar Insurance, a startup built on tech and a "human" approach to customer service. "We can re-iterate ideas over and over much faster and improve things. That's a huge advantage in any industry."

Oscar Insurance, which is running completely on the AWS cloud, depends heavily on mobile apps, with versions for both Android and AWS.

"Mobile is enormous for Oscar," Kosut said. "Customers can check on a timeline of their health history, track steps and be connected to a doctor with a push of a button day or night. Having real connectivity with each one of our members is extremely important."

Keeping those apps updated and being able to fix problems and add new features is key.

"We can take an idea and turn it into an app and launch it much quicker than another company could," he claimed. "The cloud lets us build a self-service model for developers."

Girish Juneja, CTO of Altisource Porfolio Solutions -- a global provider of mortgage, financial and technology services for the real estate industry -- also turned to app dev in the cloud for the speed it provides.

His team began working on their first app in the Verizon cloud about nine months ago and launched it within the last few weeks.

The Real Trans Inspector is an app built for property appraisers, enabling them to bid on jobs and enter data and photos, along with pushing alerts.

"Many of these apps often use services from other cloud service providers, like Google Maps," said Juneja. "It's much easier to integrate third-party services if you're using the cloud. When you have an internal environment and have to make outbound calls to third-party providers, you have more hoops to jump through, like security validations."

He also noted that it's easier to build and test in the cloud because he doesn't have to spend time and money acquiring new hardware, a new network or more storage

"In the cloud, you have all these building blocks to get started with," said Juneja. "Because storage is provided, you are testing fewer moving parts... Our app uses a whole bunch of pictures. The cloud offers us the storage API."

Altisource is a multi-cloud company, using both Verizon and AWS.

Juneja said his team is working on more apps in the cloud, and will use both Verizon and AWS going forward. Apps that have more requirements for data protection will be built on the Verizon platform, he explained.

Using the cloud for mobile, though, comes with its own issues.

While cloud services appear to be particularly well optimized for mobile, enterprises, as always, need to consider security needs, especially when there are compliance issues involved, according to Rob Enderle, an analyst with the Enderle Group.

And while Brad Shimmin, an analyst with Current Analysis, said security always is an issue, enterprises also have to consider if they're willing to give up a level of control over their application development and management processes.

"Anytime you outsource infrastructure, you give up control of that infrastructure," said Shimmin. "You give up being the captain of your own ship over pricing and your own equipment and the ongoing management and maintenance. Of course, buying those servers, standing them up and maintaining them is going to cost you sizably more but it's worth it to investigate the pluses and minuses."

Altisource's Juneja also noted that when he's building apps on the cloud and using a cloud vendor's security and infrastructure, he's still ultimately responsible for the security of that app and all of the data being used on it.

"At the end of the day, you are responsible for that data," he said, adding that enterprises have to do a lot of homework before choosing a cloud provider. "The more you use a cloud provider's services, you still own the responsibility but you're trusting the cloud provider to be compliant."

And when it comes to picking a cloud provider, Juneja pointed out that it's important for enterprises to make sure they go with one that is flexible.

"You want a cloud provider that lets you decide what you build yourself and what building blocks you're willing to take from the provider," he explained. "If the provider says you have to use everything we provide, that's not good. It has to be pick and choose."

Juneja also warned enterprises moving their mobile work into the cloud to be careful building in the cloud if their app is going to be dependent on on-premises systems.

If a new app requires data from an old financial system that is in an on-premises facility, "then your app has to work with co-located facilities," he said. "That gets complicated and then you're better off building it in your own facility."

The road to mobile

Back in New York, getting mobile apps up and running quickly has become crucial in the time since the storm, too, to help the city's 8.5 million residents get more timely information. "Mobile is where more than half of the Internet access is from," said Schachter. "If you want to reach the public and you don't have a mobile... you're missing the opportunity to connect with the public and your customers."

That's when Schachter and his team decided to go with AWS.

At the Department of Transportation, much of what they do is on a map. AWS enables them to keep that map in the cloud and build apps to put that information in the palm of users' hands. The city's old mainframe systems simply weren't able to help build those kinds of apps.

The city uses the AWS cloud to build and run its public-facing apps, like its public transit app, which gives users real-time bus, subway and Citi Bike information.

"The public can directly access that information," said Schachter. "The code lives with Amazon and every time you load the app, you get a fresh version of the code and data. It's always up-to-date. We can deploy new code and new features on our schedule."

Shopping with the cloud

For Nordstrom, Inc., an upscale U.S.-based fashion retailer, their developers use the cloud to achieve continuous delivery.

Nordstrom started out using multiple cloud vendors but has winnowed it down to just AWS.

And using the cloud, according to Homewood, makes them fast on their feet when it comes to creating new apps and updating apps to help customers receive personalized shopping recommendations and other types of notifications -- or even get stylist advice.

"Our customers expect us to change constantly," he said. "We have to move at the speed of business... We couldn't do it without the cloud in that same dynamic fashion. It's like the cloud is made up of a fleet of speedboats and we're going to need it to make those quick turns."