Why CIOs must watch and learn from China 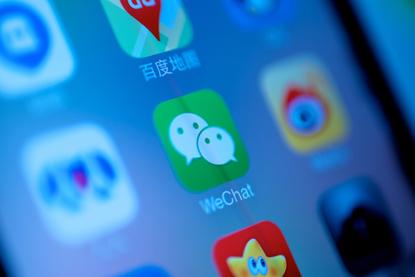 It started at a business seminar during a fashion festival in Melbourne in January and came to a head in Shanghai in April. It’s not over yet. It may never be over.

This is the story of my growing fascination with WeChat. I’m not jealous. You can try it. You too may be consumed, seduced away from Facebook, Instagram, Twitter, Line or WhatsApp.

While I was at the seminar, I sat in a session titled ‘What is your digital audience?’

I knew of it, but not in this way and it caught my eye. Then, like the moment when you notice some new trend, it was everywhere. It frequently came up in conversation with colleagues with Asian connections.

Throughout March and April I visited Singapore, Hong Kong, Taiwan and China on business and it was clear that WeChat was red hot everywhere. The question du jour from our Gartner CIO clients focused on what’s going on with WeChat? How do we work this channel?

Interestingly, even though Taiwan was coolly sitting on the digital social media fence between Japan – as Line users (200 million globally as of April) and China – as WeChat users (650 million users last count), they too recognised the wave of change.

My colleagues in China were talking loudly, in a virtual way, in our company WeChat group. With the launch of WeChat Corporate during my visit, now I have to decide between Slack and WeChat at work. Dear old email: it’s been good while it lasted, but it’s over. So over.

It was Shanghai that really flipped me, however. While I was eating breakfast overlooking Pudong, every person near me, young and not so young, was on their smartphone.

Curious as I am, I peeked and saw they were living in WeChat. Half of China now lives in WeChat, partly because Line and Facebook are blocked, but a lot because it’s well designed and compelling.

More importantly in these over marketed, spam filled times online, WeChat’s advertising content is low and feels almost non-existent. This is by design. Creator, Zhang Xiaolong, says it takes a lot of work to keep WeChat uncluttered. Less is more.

This trip started a whole new love affair for me with China’s digital markets. I visited the Long Museum in West Bund, where WeChat QR codes took me to a multi-lingual translation online guide.

I travelled to and from the gallery by Didi Chuxing (formerly Didi Kuaidi) – the Uber of China. Every car and taxi had WePay and Alipay options. China has been using contactless payment for two years, whereas I could only use Apple Pay in Australia from late last year.

There are many more reasons why Australian CIOs should be watching and learning from their counterparts in China on how to adapt and advance in the digital era. Alipay has a banking licence and cuts through the traditional payment circuits by paying credit card transaction fees for the user, so they have few barriers to using its services.

Now Chinese internet giant Alibaba is launching e-commerce in India through Alipay (pay on delivery) and its platform model of utilising existing logistics networks to deliver online purchases in a fragile infrastructure in cities like Mumbai with unreliable street mapping.

Alibaba leverages existing networks of local shopkeepers in Mumbai to deliver goods, including the dabbawalas – those who carry and deliver freshly made food from customer’s home in a lunch box to a workplace destination.

And if you’ve just settled into a relationship with AWS, watch out for AliCloud (Alibaba Cloud Computing). I heard some fascinating conversations among Asian CIOs in April debating the pros and cons of each, and working out how to convince their global CIOs of the benefits of AliCloud.

Cloud integrators are fast emerging that claim to help bridge the regulatory and interface divides between AWS and AliCloud.

Virgin and Tesla in a space race? China is getting there first. Electric cars? Chinese manufacturer BYD is on the streets, with the incentive that if you purchase one of its vehicles in Shanghai you also get a licence plate – rare as the proverbial hen’s teeth – so you can even drive it.

Internet hospitals? China is building the digital equivalent of Massive Open Online Courses (MOOCs) for healthcare. You dream it. China seems to be one step ahead.

The China market moves as fast as Shanghai’s skyline. When I worked there a couple of years ago, I felt the local CIOs could learn a lot about infrastructure, services, IT leadership and digital business.

This year I contend – we should be learning from them. We are living in interesting times.

Jenny Beresford is a research director with Gartner's CIO Advisory team. Previously, she served as a CIO, VP and GM in consulting and technology firms, an agile coach and a digital program manager, through to hands-on roles in strategic planning, change management, innovation, enterprise architecture and portfolio management.