John Deere is plowing IoT into its farm equipment 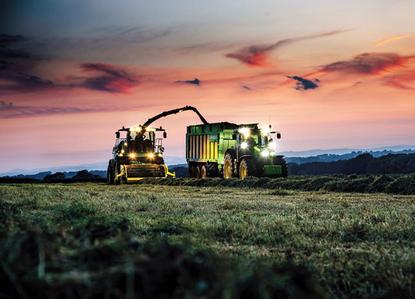 John Deere is taking the Internet of Things out into the field by developing new technologies and embracing existing ones to boost the efficiency of prepping, planting, feeding and harvesting with the goal of improving per-acre crop yields.

+More on Network World: 10 Internet of Things companies to watch+

While the company’s use of IoT devices is highly specialized, he says his experiences hold lessons valuable to any business looking to piece together systems and platforms out of individual technologies. These lessons come in two areas: businesses that use IoT to improve the manufacturing process of the products they sell, and incorporating IoT devices into those devices.

In stitching together technologies, IT groups in businesses essentially become systems integrators trying to tie together the unique mix they need, Zink says. They have to answer how to create the tools needed and to decide what technologies can help you do more with less.

He says these IT pros should be willing to experiment with new devices, developing them quickly and giving them trials as soon as possible to determine their value.

Zink operates under the principle of minimum viable product in which you create something and test it to see if it works. “As you learn you kill off the ones that aren’t doing well, but the ones that are doing well, you build from those,” he says, “and create a broader service around them.”

MORE ON NETWORK WORLD: 12 most powerful Internet of Things companies

He suggests that corporate IT pros dealing with IoT adopt a similar mentality, creating small wins that will eventually become a big win. He contrasts this approach to multi-year projects that pay great attention to detail but that don’t prove out until the end of a long time window.

On John Deere farm systems, Zink focuses on the IoT part of the equation by figuring out how to use mobile and computing technologies to create experiences he might not be able to create if the company tried to develop all the technology itself. He says he looks ahead three to five years at what the company might get out of building upon other vendors’ platforms, such as iOS.

For example, iPads are a part of John Deere’s technology arsenal. The company created an iPad app with nine mapping layers that track what’s happening in the field. Users can set, for example, how many seeds are planted per acre, and precisely how far apart they are planted.

One mapping layer called singulation shows a groups of up to 10 seeds (the number distributed in 20 millisec) and shows on the iPad exactly where they are located and whether they are spaced properly, seed-by-seed, he says.

Another IoT add-on for a row unit (which puts the seed in the ground) is a sensor that measures the pressure being exerted on each seed as it’s planted. Farmers want to change this pressure depending on how soft the soil is that they’re planting. Based on the readings, managers can adjust the pressure and the spacing. That way the seeds are set at the optimal depth and distance apart for successful growth.

The IoT sensors on the planters can communicate sensor data via Wi-Fi or other wireless technology to an iPad in the cab of a vehicle where the operator can use it to make adjustments.

The data can also be sent via cellular network to the John Deere cloud. To do this, the company came up with Mobile Data Transfer, which is a dongle that plugs into displays for John Deer equipment but also into other embedded displays in the vehicles to do bi-directional transfers with the cloud. It enables connecting machines that don’t have built-in cellular modems. So the device on the equipment connects via Wi-Fi to the Internet and from there to the cloud.

John Deere also makes after-market guidance gear. One product is the Autotrack Universal 200 – a steering-wheel replacement that takes over steering machines so they cut more exact swaths across fields and make more precise turns to align the next pass with the previous one with minimal overlap and gaps.

INSIDER: 5 ways to prepare for Internet of Things security threats

He says they can get within an inch of accuracy, a good trick for a device that could be 120-feet wide. It relies on a GPS receiver, a base station, transmitter and a display. The technology is used on tractors, combines and sprayers in 35 countries.

The system reduces the number of seeds or pounds of nutrients devices spread and improves yield by not double planting rows where the plants would compete against each other.

It’s not an attempt to create a driverless vehicle, rather it frees up the driver to handle other complex tasks that need to be performed onboard to control the device a tractor might be pulling. “It lets you focus on the other things that are happening,” he says.

On large farms this gets very complex. “There’s a huge logistical plan thinking about how do you do both when you’re planting the field, bringing the seed in and the nutrients in to manage the planting operation. But then at harvest it’s even more complex. How do you bring grain or silage off the field and then what are you doing with it?” he says. It could go to a grain elevator to be stored or to a farm. John Deere has technology to track the vehicles, whether they are full, whether their engines are running, etc. so managers can figure out the best way to accomplish the harvest efficiently.

John Deere has cloud-based software called Operations Center that tracks assets as they call in. Each large tractor has a cellular modem used to send location data and diagnostic readings about the performance of the systems on the vehicle. They also say what operation each is performing, tilling, planting, etc.

Harvest Mobile is an iPad application for a table in the combine that displays the speed, settings and the yield coming off the combine. The operator can see the readings in the cab of the machine, but it is also sent wirelessly to Operations Center so progress can be monitored remotely by a manager who can troubleshoot.

The John Deere cloud service is Web based and moving to cloud-based to view, manage and control data gathered in the field. It gives a view of where equipment is and what it’s doing. Broadly the goal is to increase the yield from given plots of land over time and to take into account how plots vary.

This can involve variable rate techniques, such as planting more seeds in areas with soil that can support more plants. Seed counts might be varied from 26,000 to 35,000 seeds per acre to maximize yield, for example. Growers can share this type of data with other John Deere customers if they choose to, helping others to decide how they should plant their own fields.