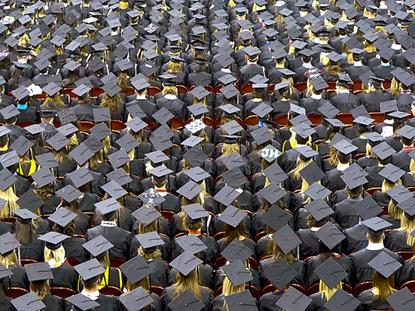 As scores of college graduates hit the job market this spring, their employment prospects are more promising than those of last year’s graduating class. In particular, computer science graduates are a hot commodity.

“Not only does computer science provide every student foundational knowledge, it also leads to the highest-paying, fastest-growing jobs in the U.S. economy. There are currently over 500,000 open computing jobs, in every sector, from manufacturing to banking, from agriculture to healthcare, but only 50,000 computer science graduates a year,” reads an open letter released by the nonprofit Computer Science Education Coalition in partnership with Code.org. The letter urges Congress to boost federal funding to broaden access to computer science in K-12 classrooms.

"It is a fierce competition for new graduates. The huge monoliths out there, like Facebook or Google or LinkedIn, are scooping up, in particular, the developers, programmers and engineers. They're scooping them up left and right," says Jason Hayman, market research manager at IT staffing and service provider TEKsystems.

The situation is indicative of more widespread demand for talent at all levels, not just at the entry level. "IT unemployment is around 2.5%, and 80% of IT professionals are willing to listen to [offers for] new job opportunities, even when they're happily employed. So there's this huge talent gap, this huge supply-and-demand chasm out there, where you just can't get enough of the IT talent you're looking for," Hayman says.

BE SURE NOT TO MISS:

With supply/demand conditions in their favor, many of today’s computer science graduates are entering the workforce with high starting salaries and multiple offers of employment.

The overall average salary for bachelor's degree graduates earning computer science degrees is projected to be $61,321 this year, according to the National Association of Colleges and Employers (NACE). That’s the second-highest starting salary, behind only engineering graduates, who are projected to earn $64,891. Additionally, NACE reports that among the 2015 crop of new graduates, those majoring in computer science enjoyed the highest full-time employment rate (76%) within six months of their graduation.

Similar findings are reported by PayScale, which ranked 319 college majors based on earning potential. Engineering, math, science and technology fields dominated the rankings in the College Salary Report, which provides the median starting pay and median mid-career pay for the alumni of more than 1,000 schools.

Given the demand for talent, companies should be willing to expand their hiring strategies and “not just fish from one specific pool of degree holders,” TEKsystems’ Hayman says. A conversation might start with a company’s definition of a perfect-world candidate; the trick is figuring out what attributes are most essential.

Thinking outside the box can help companies land technical talent that may not come from a traditional computer science background. IT staffing specialist Mondo has found success matching candidates who come from a marketing background with clients who are trying to fill front-end development roles, for example.

Marketing is increasingly reliant on technology, and many new graduates with marketing-related degrees have learned to develop web sites and mobile apps, notes Stephen Zafarino, technical recruiting manager at Mondo. “Clients are looking for developers as recent grads, but they don’t necessarily have to come from a traditional computer science background,” Zafarino says.

New graduates may have to temper their expectations, too. "If I'm looking to pursue a long-term career in IT and technology, odds are I'm not going to come right out of school and get job as data scientist, or as a lead cybersecurity officer," Hayman says.

Stepping-stone positions, such as desktop support or network support, can be a good fit for new graduates to sharpen their communication and problem-solving skills, Hayman says. "That's a great way to learn the foundational skills. A lot of times in those roles, you'll start to learn some skill sets that become really critical down the road for a successful IT career."

In the software engineering world, new graduates might find jobs in lower-level programming or analyst roles that support senior developers and software engineers; at the entry level, candidates might perform testing and defect identification, for example.

In the cybersecurity realm, a role such as information security analyst is an entry-level possibility. "They do things like run reports or test scripts, and they try to identify the issues that then get bubbled up for remediation to the higher-level security engineers and administrators." Hayman says.

A stepping-stone role for someone who wants to develop into a software engineer could be anything in the digital and creative space -- such as user experience, graphic design or social media, Hayman says. These areas “are a bit newer, and IT and the business are still trying to figure out who owns that role."

It's advantageous because these areas typically span both the IT realm and the business realm. "A lot of folks coming up through school might have some of those skill sets, and that's a great way to break in, to come in through a different door if you're somebody trying to pursue a career in IT," Hayman says.

Despite tech’s demand for talent, new graduates aren’t immune from the need to showcase their skills, particularly since companies maintain strong requirements for candidates.

“There are few positions that are true entry-level positions," Zafarino says. A listing for an entry-level software engineer might specify two years of experience, for example. "It's a challenge for [new graduates], but if you come from a good program, people are more willing to take a chance, expecting that you're going to be able to perform."

New graduates who have gained practical experience while still in school have an advantage. "Some [graduates] do have experience coming out of school, which is very attractive. Once a client gets a hold of that, they want more of that. That's their expectation,” Zafarino says.

It’s not just about internships, he notes. Some students have done freelance or contract work while in school.

GitHub is another way for new graduates to demonstrate their abilities and commitment to the computer-science craft. Prospective employers can see how active a candidate is on GitHub, check out the quality of the work, and even set up tests through GitHub. "Though you may not have the work experience, you have created something that people can see, and it’s proof of what you can do and what you have done," Zafarino says. "A lot of clients look into that. You want the developer that’s passionate."

Meanwhile, in the bigger picture (not just tech), the jobs outlook for 2016 graduates across all majors is solid, if not quite as rosy as it was six months ago.

Employers expect to hire 5.2% more new graduates from the class of 2016 than they did in 2015, according to NACE. The projections, while positive, are less bullish than they were last fall, when respondents to NACE’s twice-yearly Job Outlook survey predicted an 11% increase in hiring of new graduates.

Additionally, some 67% of employers told CareerBuilder they plan to hire recent college graduates this year, up from 65% last year and the highest percentage since 2007, according to the jobs website. Entry-level pay is increasing, the survey finds: 37% of employers plan to offer higher starting salaries to recent college graduates than they did last year, and 28% will pay $50,000 or more.