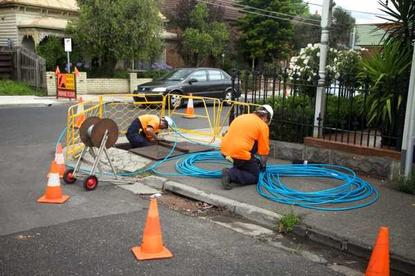 Revenue increased 157 per cent to $421 million and the number of homes and businesses connected to the NBN went from 486,000 to 1.1 million.

NBN Co CEO Bill Morrow said: “The NBN rollout has now built considerable momentum and we are quickly ticking off our milestone targets. The NBN network remains one of the most complex projects to complete and we are now underway with the task of doubling our build again in this financial year.”

In the past year the company introduced FTTN (fibre-to-the-node), the Sky Muster satellite service, and HFC (hybrid fibre coaxial) to its technology mix. FTTP (fibre-to-the-premises) remains the technology option available to the majority of premises with 1,381,800 now ready to receive the service. Most end users (822,652 as of the end of June) are currently using the FTTP network.

“Of the 2.9 million premises able to order an NBN service, 70 per cent of these are in non-metro and regional Australia as we step closer to bridging the digital divide and connecting Australia,” Morrow added.

“The NBN team has been working together with our Delivery Partners to rollout the NBN network to more Australians than ever before – today, one in four homes can order an NBN service.”

Of the technology mix, FTTN has been responsible for most of the company’s capital expenditure at $1,668m in the last year.

To date, the cost per premise of the main technologies stands at $4,441 for FTTP where already installed copper wire is replaced, and $2,608 per premise to roll out FTTP to new developments. Fixed wireless costs $3,359 per premise and FTTN $2,257.

Average revenue per user raised in the last financial year compared to FY2015 to $43 from $40.

“My management group and I are confident that the plan, industry partnership and talented team now assembled are able to continue to meet challenges as we head towards our 2020 goals,” Morrow said.

The company is currently trialling G.Fast, FTTdP and DOCSIS 3.1 technologies.