Not women in tech that need fixing, former Chief of Army 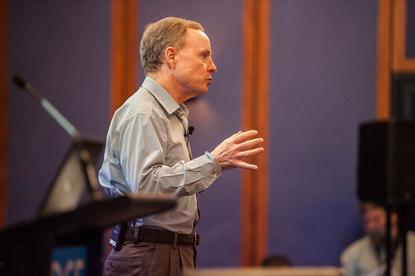 Women seeking leadership roles in the technology sector should not get special training or be taught how to be more assertive, says former Chief of Army David Morrison AO.

“This isn’t about fixing women. Women don’t require fixing,” he told the audience at a Gartner Security and Risk Management summit in Sydney on Monday.

“I don’t know whether you need special emphasis on those things. I do think it reinforces the message that women need to sound and act more like men. And that’s not what you want at all. In any workplace.”

Some have cited a so-called ‘gender confidence gap’ as one of the reasons women are less likely to hold senior positions in IT and recommend female workers communicate with more authority and confidence.

Morrison said it was businesses that needed to change their behavior, and those that did would benefit from a more creative workforce.

“I’m not saying it’s easy. You’ve actually got to have conversations with men, particularly around the way they listen to women speaking. And get them to change their approach to allow for confidence to build.”

In his four years as Chief of Army, Morrison helped boost the number of women in the military force by 700, a two per cent increase. Far more women were appointed to command positions than at any point in the army’s history, he said.

“And that number’s growing and in every single case, those women were the best person for the job. It’s just we hadn’t seen their talent and potential in the same way.”

In 2015, a Deloitte and Australian Computer Society (ACS) report found that only 28 per cent of IT workers in Australia are women. Latest Australian Bureau of Statistics’ Gender Indicator figures show that at last count just 26 per cent of Key Management Personnel, 24 per cent of Board Directors and 17 per cent of CEOs were women.

Morrison, who famously told troops to ‘get out’ of the force if they could not accept female colleagues and treat them equally in a Youtube video in 2013, said the IT industry should better celebrate successful women.

“You need, first of all, to change the stories you tell yourselves about yourselves. I’m no expert in your area but the IT industry celebrates many stories in a very particular way and you only have to think of iconic figures in your sector here in Australia and around the world to see men, not women," he said.

“And it’s not that there aren’t successful women, clearly there are, but their victories aren’t being celebrated.”

Organisations that were able to ‘give women a chance’ would reap the benefits, Morrison added.

“Once women are given opportunities to fill positions they haven’t filled before, make contributions where they haven’t been listened to before, momentum grows. And the workforce changes.

“My experience is that [the workforce] changes rapidly and dramatically and much more for the benefit of the organisation. Once that happens, you can’t go back. You can’t switch it back. Because women have shown, demonstrated, that the organisation moves ahead when they’re given the chance.”