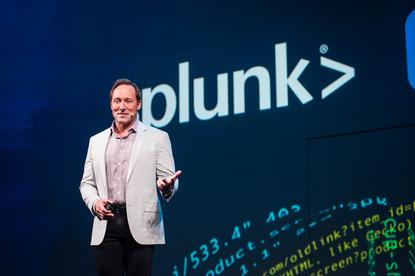 If Splunk is being used in your company, chances are the machine data analysis tool fulfils a specific function in IT operations or security.

That's the case for small pockets of users within Australia's biggest banks, telcos and government agencies, who are using Splunk, a Google-style search and investigation interface for unstructured data, to optimise DevOps, prioritise incidents and detect breaches.

When Splunk CTO Snehal Antani walked on stage to deliver closing keynote at the seventh annual Splunk user conference in Orlando last week he carried with him a new addition to the company's line of funny slogan t-shirts. It bore a pun to sum up the company's new position: "Don't be a tool".

From ITOps to the boardroom

For many years, Splunk's employees were not allowed to refer to the company's product as a platform. Orders of then CEO Godfrey Sullivan who steered the company through its IPO in 2012.

"He was very strict about it," remembers Antani, speaking to CIO Australia last week. "He had a discipline of not declaring we were a platform until we were truly ready, and our market was ready."

Both are ready now, the company says. Businesses are realising that the machine data – the log files from packaged and custom applications, app servers, web servers, databases, wire data from networks, virtual machines, mobile devices, telecoms equipment, operating systems, sensors, mainframes and more – so valuable to IT operations and security teams is the very same data that can be used by marketing, HR, operations, finance and in the boardroom.

Once considered a useful tool by IT, for IT, Splunk is now positioning itself as the 'enterprise machine data fabric', that can be weaved into every business function to help them 'find the gold' in machine data.

"The majority of the time we landed on the IT side because we were a viral software that people just downloaded and usually it's the IT folks that do that," says Splunk's SVP of security markets Haiyan Song, "but that is changing."

According to Antani: "We've hit that inflection point. It's more than just IT and security. It's about purpose and impact."

Central to Splunk's perception changing effort is machine learning. Driving the digital transformation of any company is the promise of data as a means to predict the future and inform reactions. For that you need complex algorithms, and Splunk is seeking to provide the framework for them to run on.

Splunk's machine learning toolkit, launched last week, is essentially an open source app so customers can put complex algorithms – both universally applicable and use case specific – to action on their machine data. Splunk will, Antani says, become a "distribution channel for machine learning algorithms" for partners to build upon.

"We can only imagine within Splunk one per cent of all the algorithms that are relevant against big data," Merritt told CIO Australia last week. "The toolkit is a framework so the pool can provide algorithms and stage algorithms.

"Machine learning enables organisations to get deeper insights from their machine data and ultimately increases the opportunity our customers can gain from digital transformation."

Winner takes it all

Splunk claims it is the only tech company that has to turn down happy customer speakers for its conferences. But the majority of five thousand attendees to last week's .conf 16 came from IT teams. To meet its platform ambitions, and permeate every business function, those at the board level will need to be convinced of Splunk's benefits too.

Splunk has opened new offices in Sydney and Melbourne, to house a rapidly expanding sales team and breakout rooms for training and demonstrations in a bid to do just that. The company's Australian employee count has risen from 17 to 72 in less than a year.

The pressure is on. Splunk faces competition from the established tech giants Microsoft, IBM and Oracle each of which offer big data analytics solutions and the likes of Sumo Logic which competes specifically on Splunk's machine data hometurf. "We're in a high speed market," Antani said. "You're not going to see fragmented market share in our business. It's a winner take all market."

On the customer feedback board in the Orlando conference's vendor hall, visitors put stickers on areas they thought Splunk could improve. Most of the unhappy smileys were stuck in the cost category.

"If you only use us as a tool to solve one problem your really leaving a lot of value on the table," admits Antani. "Where we become stunningly cheap is when you're using us across IT and security and business analytics and so on.

"It's a single data platform with multiple lenses. Think of all the different tools you just displaced and disrupted because you don't need all these speciality tools anymore."

It's all about changing perceptions says Merritt, convincing organisations to go 'all-in' on Splunk.

"Splunk is going to be this horizontal technology across the organisation," Merritt said. "The world I don't think has seen us that way though. When you're ready to talk about big data and big data solutions sometimes Splunk is in there, sometimes not. More times than not I find the opposite - 'I love Splunk for X'."

"The machine fabric message is a very purposeful piece to try and change the perception of Splunk...[to] something that can be used across the organisation to solve tens of thousands, an unlimited list of potential use cases."

Antani adds: "I want to get to a point where CEOs are both inspired and terrified by Splunk. Inspired by the opportunity and terrified their competitors are using it. How do we get to that point?"

The author travelled to Splunk .conf 16 as a guest of Splunk.