​Keep on exploring the digital frontiers

Technologists are today’s explorers and inventors at heart. I think that’s why we never tire of adventuring into the unknown … into the wild digital frontier. 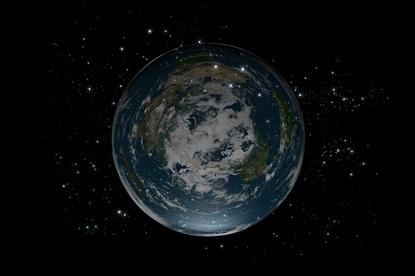 Our hyper-connected, hyper-agile, digitised world was once a futuristic vision and the realm of fiction and fear. The impossible meeting the fanciful.

Just as the crazy, brave explorers of the Middle Ages set out in their small boats – whether east or west, from Spain or Hawaii, ignoring the cries of the sensible citizens clinging to what they know: “The Earth isn’t flat? Burn the witch!” – IT forges ahead, exploring and inventing.

Those of us that work in IT continue to surprise ourselves as much as we amaze the world. The outposts of digital possibility are still to be imagined, discovered and created.

Today, digital business is the creation of new business designs by blurring the digital and physical worlds. It involves the interaction of people, businesses and intelligent things; a mesh of interwoven nodes and connectors through which data flows and becomes meaningful and utilitarian, supplementing and extending the power of humanity.

This is not science fiction. It’s the reality of digitisation that IT has produced and with creation comes responsibility.

As Peter Sondergaard, senior vice president and global head of research at Gartner, told CIOs at this year’s Gartner Symposium in Florida: “You are builders of a new type of infrastructure that won’t just reshape business but the way people live – society itself.”

Shaping society through IT gives massive purpose and responsibility into the hands of CIOs and IT, as we to continue to advance digital business.

Top digital business performers don’t see technology investments as a burden to be controlled or managed down. They view IT as an asset and a value engine, rather than a cost.

CIOs in these types of enterprises are trusted to design, build and evolve the digital business platform across five domains: IT systems, customer experiences, things, intelligence, and the ecosystem foundation.

The domains are interconnected and interdependent.

However, the pace and impact of investment in each domain becomes a strategic choice at c-level, uniquely matched to the business’ vision – whether that’s differentiation, growth, pace, spread or as ambitious as a total industry disruption.

In the year ahead, CIOs evolving their organisations’ digital capabilities and potential will align their IT investment portfolio to one or a few of the five digital platform domains. Which will have the most impact and payback for their digital vision and business model?

Of the five, three are already staple familiar IT components today.

The other two domains are less explored, more nuanced and potentially bear the seed for radical shifts and plays in the digital universe.

“Things” are the domain of a cultivated Internet of Things (IoT) platform. The enterprise IoT platform connects physical assets for monitoring, optimisation, control, monetisation and vastly extended collection of data.

This is an IT domain that is still to be fully formed and utilised. Those who master and unlock the IoT capabilities of connectivity, analytics and integration to core and OT systems are looking over the ‘flat earth’ horizon.

Looking at ecosystems, you could simplistically envisage them as the ‘macro’ IoT – digital business ecosystems support the creation of and connection to external ecosystems, marketplaces and communities.

In a fluid and potent ecosystem, the fundamental elements IT needs to master and engineer include API management, control and security, as much as connectivity and openness.

Most enterprises don’t have a formal IoT or ecosystems platform yet, so there may be hesitation to invest in these areas. This is where the explorer and inventor in IT comes into its own.

Finding, understanding and bringing back the ‘treasures’ to inspire a business audience of decision makers and purse holders, to suspend disbelief and make some ’faith-based’ investments to become digital world pioneers and inhabitants, at least initially.

We are the Marco Polos of this century. When China named its current economic trade strategy the new Silk Road, they gave a nod to the courage and curiosity that drove Marco Polo to leave Italy and sail beyond the known horizons of a flat earth, to visit China in the 14th century.

The new Silk Road is an example of the power of digital exploration, aiming to blur digital and physical in a hyper-agile trade route, trading in goods, services and ideas. Exemplifying the power of IT as a value-generating engine.

I was told very early on in my career by an entrepreneurial business builder to always work in a revenue centre not a cost centre. That shaped many of my career steps (and some missteps) along the way. But I’ve held it close whenever I’ve had to defend investment in IT on my watch.

IT has created the digital business and social worlds that billions of humans today joyously, awesomely, and at times fearfully, exploit and explore. Digital business is happening, generating value well in excess of expectations; that much is apparent.

Yet how digital business will unfold and reveal the societal and business impact remains less clear. This is the responsibility that IT holds in its expeditionary and inventive hands.

In 2017, go forth and share new views of a less than flat earth with your business and society!

Jenny Beresford is a research director with Gartner's CIO Advisory team. Previously, she has served as a CIO in global enterprises, held VP and GM roles in consulting and technology firms, worked as a hands-on enterprise agile coach, an innovation lead and a digital transformation director. Ms Beresford will be speaking on ‘Beyond Bimodal: Toward a Sustainable Digital Business Model’ and other topics at Gartner Symposium/ITxpo 2016 on the Gold Coast, 24-27 October.