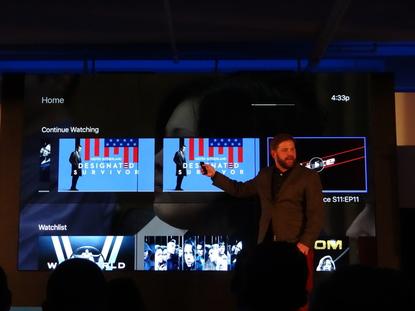 If you're looking to cut cable TV, a new video streaming service from AT&T will be available starting Wednesday.

DirecTV Now is a flexible pay-as-you-go streaming service that starts at US$35 per month. DirectTV's conventional satellite service is the foundation, but the content will be streamed over the internet.

Traditionally, users needed a two-year commitment and credit check to get DirecTV, but those requirements are not needed for the new service. The streaming service will work on the Roku, Apple TV, Chromecast, and Amazon Fire TV streaming devices, as well as mobile devices with Android and iOS and PCs.

The programming lineup includes Disney channels, ESPN, AMC, Turner Broadcasting, NBC Universal, Fox, and many more channels. HBO and Cinemax can be added for $5 each. A deal to add CBS and Showtime is being negotiated.

AT&T also plans to add a cloud DVR service in the coming years. Subscribers will be able to watch two streams simultaneously on separate devices.

DirecTV Now is the third major streaming TV option after Sony's PlayStation Vue and Dish's Sling TV. It's competitive on price with PlayStation Vue, which starts at $40, but not as cheap as Sling, which has fewer channels for $20.

For AT&T, DirecTV Now is a big deal and a new way to deliver programming. It's also a way to say goodbye to the ubiquitous DirecTV satellite receivers.

"This is the foundation for how we'll do things in the future," said John Stankey, CEO of AT&T Entertainment Group.

The launch is as significant as the company's U-verse broadband launch about 10 years ago, Stankey said.

DirecTV Now will provide the company an opportunity to stream devices outside TVs hanging on a wall. It has the channels and delivery models needed for mobile devices and PCs.

"There's more to be done on this," Stankey said.